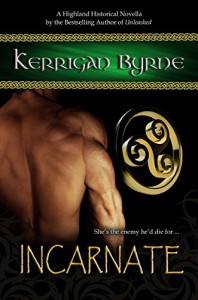 Incarnate brings the conclusion to Kerrigan Byrne’s paranormal series, The Moray Druids. This series was another signature Kerrigan delivery as a whole, short and sweet with some hotness and paranormal actions sprinkled in it. Incarnate is the story of Druid King Malcolm, whom we find making some serious decisions to save the world from a coming apocalypse.

The de Moray family is one of the most ancient families of Druids and Witches in the Highlands. Right now, there are only 3 surviving members who are fighting an insane battle to save the world from said apocalypse. Malcolm’s power lies in the element of earth. His sister, Morgana, the h of book 1, Insolent, wields the power of water. Kenna, their cousin and the h of book 2, Indecent, can manipulate fire. An ancient tome called the Grimoire is what they’re trying to hide from an evil trio, the Wyrd Sisters. These three were once a part of the De Moray family but have gone astray when they surrendered to the dark and evil magic to enhance their powers. Now they seek the Grimoire, which holds the secrets of the universe; everything that you can think of, to use it to bring about that apocalypse and ultimately, to rule the world.

Morganna and Kenna, both sisters are mated to the berserkers Bael and Niall. Morganna met Bael when she was returning (rather escaping back) to Scotland from England where she was in an exile of sort. Bael, on the other hand, was fighting in what was supposed to be his last clash with the enemies to end a long, miserable and unwanted existence as a berserker. He had no interest in living to drench himself in the bloodbath anymore. Their meeting was swift and rather unexpected, as if fate brought them together. Morganna, seeking protection to reach her homeland safely, had to ‘convince’ Bael to escort her. Bael had no interest since he was angry that Morganna used her healing power on him and now he’s decidedly not as dead as he wished to be. But his beast has decided it wanted Morganna, so on the way to Scotland, they end up sleeping together, which means Bael becomes mated to Morganna.  She tells him of the trouble that’s brewing when the Wyrd sisters pay a visit even before she could reach her home. At that time, the Grimoire was with Kenna, who was supposed to be somewhere hiding and protecting the ancient tome.

Kenna was hiding in an ancient abbey where the nuns had no idea who or what she was. And she was being punished by the sadistic Abbess more often than not for her supposed impudence. Then they decided she was a witch, so more punishment... and that’s how Niall, who came to raid the abbey with his men, found her. He’s... er, attracted to her on spot (you gotta read that scene :p), while Kenna finds a way out of the abbey with this distraction he and his men were providing. She also takes the matter into hand, and er, ends up mating with Niall’s beast. Et voilà, now Niall is bound to her forever!

Niall is not happy to be ‘tricked’ into mating, much like Bael but he can’t stand back and relax when he also learns of the upcoming trouble and the reason behind Kenna’s presence in this abbey. So they, including Niall’s men, travel to Dun Moray to face what’s coming for them next. Morganna was already there with Bael and waiting for Kenna’s arrival.

When the evil sisters finally strike at their keep, they manage to steal the Grimoire, opening up the possibilities of a whole new array of chaos in their wake.

Have to mention that Malcolm was NOT happy to find his sister mated with a berserker, a group of people that the Picts generally despise. Sadly, he didn’t know that Kenna was also going to bring in another berserker as her mate. Poor Malcolm! I had too much fun reading his monologues in book 2. The only reason he welcomed them to the family (sort of) was the fact that both men were devoted to their mates and would die for them if needs be. Niall’s army was also a thorn at his side since Malcolm uses his magical power to guard his land and its people. Since Niall is now an inhabitant of his castle, his men, too are here to annoy him to death. Too many Vikings going around for Malcolm’s peace of mind that’s for sure! LOL But then, he has something bigger to worry about because the Wyrd sisters still have the Grimoire and he needs to save before everything is lost.

One day, on his way to investigate something, Malcolm comes across a beautiful woman in tattered, dirty clothing, hurt and asking for help. It was in the middle of the woodlands and seeing no one else around, he stops his horse to help her. Malcolm isn’t happy to see that she’s living in this hovel that is barely standing. I don’t know why he didn’t have any suspicion about her, for being a druid he must’ve had some sense of darkness or danger around her. Then, while helping her settling in, Malcolm ends up sleeping with her. That was quite unexpected, at least for me, because he always came off as a cautious, reasonable man, if not always in a pleasant mood.

The reason why I’m saying this is because Vían was anything but what she appeared to be; a damsel in distress. Once, long ago, she was a human being but that was before she’d given her soul to the evil. Though the story behind it was sad, she’d been caught in the darkness created by Badb, the most evil of the Wyrd sisters. Vían lived centuries as a shade, until Badb summons her to do her bidding; seduce the Druid king, then utter this spell to wreck havoc on his magical power. Apparently, she has been used by Badb before to play the seductress and harm other individuals. But the truth was, Vían was basically no villain. She had a conscience; barely tickling at this point but it was there. She hated what she had to do for her ‘mistress’ but after spending so many years into a dark nothingness that almost rendered her insane, Vían would do anything to gain a little bit of freedom. This time, the task seems to be much more important as Badb promises complete freedom— ONLY if she can capture the Druid King for her.

But Vían could never do anything on time. After a beautiful night making love to this man, who has already shown her kindness, telling her who he was, she was beginning to crave what she shouldn’t have— love. She was craving a little affection, and Malcolm’s touch gave her the sustenance, a faint hope, though she knew there’s no way this can lead to anything good. She’s not made for those things anymore, and no matter what her heart wants, she’s here to do her mistress’s bidding. And she’d failed to deliver the blow when she should’ve, which means she’d be thrown back to her ‘old’ existence. Either way, Malcolm would hate her with all his being once he knows the truth. For Vían, the misery brought by this hatred wouldn’t measure up to anything else.

In the morning light, Malcolm shocks Vían by asking for her hand. It was apparent that one night of sex and talk somewhat relieved the enormous burden he’s been carrying on since his puberty. Malcolm has never had a moment to really relax and enjoy his life since he had too many responsibilities befitting his status. But in this hovel, in the wood where he’s in his element, with this beautiful woman who can make love like no other, Malcolm finally felt at east. And that mattered to him immensely. He wanted Vían in his life so that he can turn to her after a long day of shouldering his responsibilities, that is, if they can recover the Grimoire and avert that apocalypse.

But things don’t go smooth as trouble finds them even before Malcolm could take his would-be bride to his keep... And to find out the serious decisions he had to make to save the world for future generations, read this book. The ‘big showdown’ was pretty thrilling IMO.

Apparently, de Moray family stories don’t end with Incarnate. In the end, we’re given hints as to how Malcolm’s decision would affect the future generations of de Morays. There’s an anthology called Which Witch is Which? where their legacy continues in a contemporary setting. I hope to grab it and read in future. But for now, I can only say that I’m in love with the medieval setting that Kerrigan uses for her hot Druids and Berserkers, where the magic is still very much alive. I’d love to see more books set in that era! 4 stars.