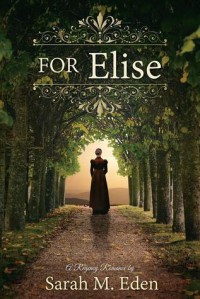 My first Sarah M. Eden book and I liked it. Nice storyline and characters. However there was something decidedly discordant about the storytelling. It's a clean romance, which is why I

probably never felt the attraction between Miles and Elise all that much. Their relationship never really developed beyond the childhood friendship. The story ended just when they found each-other, going past every hurdle thrown at them. It was a downer since I was rooting for them both. The murder mystery was very interesting, however no light was ever shed on what exactly happened to Elise on that fateful night that changed their lives forever. We're left to make our own conclusions with a few hints here and there. And It was super confusing. How could she not know the person who assaulted her, not even a single hint of him whenever he was around later in the story? That was a big question I kept asking throughout the story

This story is related to the author's Jonquil Brothers series as Miles is a cousin to the Jonquil family. I haven't read that series so can't tell if Miles and Elise were introduced earlier or not. Might do a full review later but the above generally surmises my opinion.

PS: Does the spoiler button in booklikes work? I never see the part I wanna hide being hidden (not even in preview), so I'm confused. :-s