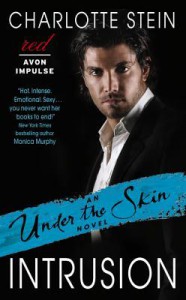 Another book I didn’t think of doing a full review, yet here I am, doing it anyway. Intrusion, book 1 of Under the Skin by Charlotte Stein, is my first book by the author. I recently hosted a blog tour for her which is how I came by this series. While I had my ups and downs reading, this novella certainly had a very intriguing storyline that had me turning the pages. I’d go as far as to say that it’s nothing like I’ve ever read before!

First, just TBH, I wasn’t that fond of the author’s writing. It seemed to me that she loves writing in convoluted paragraphs in long-winded sentence structure that, at times, felt entirely unnecessary. Maybe it’s her style but it bothered me for a long time. I even debated finishing the book. Though it took me quite a while to get used to with it because I kept re-reading paragraphs over and over again to try to make some meaning of what was going on... or what was it that the author was trying to convey, I’m glad I didn’t give up. Because when I finally got to the good parts, it was simply amazing! I think I would’ve enjoyed the story even more if not for the writing.

Intrusion truly is a story about two damaged souls. There’s nothing superficial or over the top about it as we find in some stories. Both H, Noah and h, Beth had been the victims of kidnapping, by two different individuals. And those suckers were able to f*ck up their minds to a great extent. Needless to say they both were completely changed by their experiences. While Beth was able to pick up the pieces and at least had some semblance of a ‘life’ by maintaining a job as a nurse, Noah wasn’t so fortunate. And that’s where the story begins.

Beth knows someone lives just off the road near her house but no one knows anything about him. No one’s ever seen him coming out of that house in the broad daylight. If you read the first pages, you’ll see just how steeped in gossip this individual’s life is. Without him even participating in any of it. Jane heard many of those grim stories; that he’s a serial killer, he killed his wife and hid her in the basement, so on and so forth... just because the guy living there is a recluse. Beth has never thought beyond the gossip until one day she’s forced to face her uneasy feelings  to go in search of her dog Trudy. She was quite sure that this guy has hid her dog, maybe even did something terrible too. And so, there she was, standing at his doorstep, when he finally opens it even before she could tap. With that Beth is completely dumbstruck; not only because she now can attach a face to that ‘unknown serial killer’ but also that that face is absolutely beautiful to be held. At least to Beth, he seemed like the perfect specimen for her.

This is how Noah and Beth got involved with each-other. Awkward looks at first, completed with stilted conversations. Beth finds that Noah is a genius with a brilliant mind. He has multiple PhDs! Then one night, to her distress, she discovers that Noah sleepwalks too. She becomes curious, wanting to know more about him. From there, their relationship slowly developed into deeper, more meaningful conversations where the mutual attraction was absolutely palpable. However, Noah warns that there’d never be anything more between them. No sex, no touching. Noah is nothing if not straightforward. He’s bad at small talk and worse at mincing words, so you expect nothing but simple truth from him. And when he poses the question to Beth about a seemingly platonic relationship, she finds herself in a tangle. Because honestly, Beth can’t. The moment she saw Noah, this irrational lust surged up inside her, nothing like she’d ever experienced in her life. FGS, her sexual adventures is so few and far between that even she’s confused why her body responds to Noah that way! It’d be difficult but Beth loves being with him, so she agrees, at first, to give it a try.

But somewhere in his mind Noah knew it wouldn’t work. Most especially because he’s very attracted to Beth. It made me think he may have spied on her from before since they were neighbors but nothing was ever shown or hinted at. But therein lies the rub. Noah has... problems. Nightmares that terrifies him, threatens to smother him. Even then he finds himself wanting to kiss Beth more and more each day. Slowly their unconventional yet honest-to-the-core relationship begins to take shape, and Beth finds it even harder to not think of knowing this man intimately. And at night, when his nightmares threaten, she feels helpless. You see, she has her own demons to fight too, how can she help this brilliant man she’s slowly falling in love with? Worse still, he won’t let her. Oh he’d pleasure her for her sake, but she’s not permitted to return the favor. At first, she thought she’s intruding too much where Noah was so vulnerable. But then, she knew that she must try harder and fight for her the man she wants so much.

At one point, things get out of hand and Beth finds herself heartbroken. But when Noah’s very own life is threatened by his past, she can’t possibly stay away...

I can tell you that you’ll find yourself immersed in Noah and Beth’s gradually expanding sphere of love, lust and the cruel reality of their past. This was more of a dark psychological thriller with an edge of eroticism in it. Yep, Noah and Beth’s intimate scenes were hot, and you cheer along as Noah steadily begins finding balance with her help. Beth wasn’t really weaving magic to help him out, but whatever it was worked for Noah to a certain level. However, they still needed to face Noah’s past demons. Beth makes a conscious (or unconscious, one can debate) decision to face it with him, proving that her love is as solid as it’ll ever be. Noah, too, proves his love for her at the end of the story. How? For that, you have to read this novella.

Don’t expect a traditional HEA, but don’t be afraid either. There is one.

We’re not really given any description of Noah’s traumatic experience, so you know some things but the rest is up to you. Same with Beth, though I thought hers was a more straightforward kidnapping than Noah’s own. I’m not trying to compare and contrast because I simply can’t, but I wished we had more insight into Noah’s experience. He’s yet another hero I read whose real name was not known for the most part of the story, when Noah confides in Beth about it. I believe it was said somewhere in there, even then, I wasn’t sure if that was the real name. It was crucial for him to hide his identity which corresponds well with his traumatic past.

4 stars. I’m still considering my options about giving the next in the series, Forbidden, a try. I’d like to see if these books are connected in any way, though I have a feeling that they’re not. I can certainly say that there were no other significant secondary characters who might’ve been candidates for their own books, so...