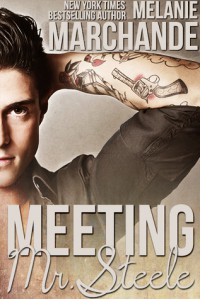 So, I think I can say that Melanie Marchande’s writing is rather fun. Meeting Mr. Steele was all sorts of insanity, idiocy and fun-filled combo in one package. It’s a short novella which a part of the author’s A Novel Deception series and currently available in the Red Hot Alphas Box Set.

It seems that A Novel Deception is based on authors who write under pennames... and, er, adjust facts in their own way, thinking a little ‘white lie’ here and there won’t hurt anyone. Unfortunately, they’re soon forced to face the music; whether you’d be laughing alongside or feel for their plight is a completely different thing. This is the only thing I found common between this novella and book 1. I don’t recall meeting Tuggey in Meghan and Adrian’s story for sure.

Even if they don’t need to be read in order, I’d recommend My Secretary: Undone just because it’s another sexy, funny novella about a secretary who is so annoyed at her hot Billionaire boss that she ardently wishes to throw an ashtray at his head. Then the boss reveals his ‘secret identity’ and said secretary’s life is never the same again. Oh don’t forget that the boss has been crazy for her from day one, so much so that they had this ‘bite-your-head-off’ kinda relationship. Oh my! You should just read it because it has a Billionaire erotica author! :p

Now this one... Well, let’s just say our Kimberly (aka Tuggey, as she likes calling herself) is an author much like Adrian. Almost, that is. While Adrian (above mentioned ‘boss’ of book 1) wrote uber-hot erotica under a female penname, Kimberly does the opposite. She writes the same type uber-hot erotica under a male penname; Landon Steele. Oooh, now you know where this is going, right?

So, Kimberly or Kim has tried it with her real name but that boat didn’t float the way she expected it. Though frustrated, she planned to do something else; something that just might work. And thus, Landon Steele, the ‘real life dominant writing erotica using personal experience’ was born.

Now Kim knows she’s a big, fat liar (no pun intended), for she’s nothing like the hot, sexy and self-confident 6 pack-ed Dom she writes about. Kim is not skinny, has had a lot of trouble in her past romantic endeavors for her well-rounded figure. (Never fear, I also call myself ‘well-rounded’.) I rather felt sad about whatever I read; incidents that reflected really badly on her psyche. She has low self-esteem which she tries to hide behind her ‘smarta$$ author’ vibe. In short, Landon Steele is her ultimate male fantasy-come-true. The type of guy who’d probably never look at her twice. :(

Landon Steele is the current ‘it’ thing... I mean, author. He’s super popular with the ladies (no kidding!) who want a piece him always, including the pictures of his family jewels, though they’d probably much prefer fondling it. LOL Kim gets many of those types of requests in her inbox. She knows she’s walking on eggshells, but then one day she’s forced to face the music too. Landon Steele gets an invitation to appear on a popular talk show. Kim is shocked, scared but excited as well. What the hell is she gonna do now? She can’t very well appear as ‘Landon Steele’ when everyone knows she’s a ‘he’! So what’s the plan? Is she gonna pass up on the opportunity?

Turns out, Tuggey wants that promotion that’s sure to become the ultimate boost for her career (and sale). And that’s where Josh comes in. A struggling actor, Josh was trying his best just to get by when Kim’s proposition to play Landon Steele reaches him. Directly from her. An offer with a hefty price tag that he certainly can’t pass up. Money is tight and Josh needs this job even if he can’t put it on his resume. What none of them remotely considered were the complications that might arise from not only trying to pass on a hot actor as Landon Steele over prime-time TV, but also that in between rehearsals, they might start finding each-other way too delectable to resist!

Personally, the ONLY thing I kept thinking was, really Tuggey? In this day and age of fast media and faster internet, you think you can pass on an actor as yourself without anyone ever finding out the truth? That’s your ‘big plan’? I don’t buy it. I couldn’t, really, because the whole time I kept envisioning them getting in trouble at one point or the other. That was a disaster waiting to happen, so yah, call yourself an ‘idiot’ twice over Tuggey!

But I bear no grudge. They apparently survived it well enough, which made Kim and Josh’s relationship even stronger. She even bounced back and now her writing has taken a new direction! I liked Kim for the most part and Josh too, so it was all good for me in the end. All I can say is that I wish them all the best. 3.75 stars.