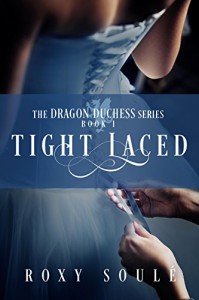 Tight Laced is loosely based on Cinderella. I mean very loosely. The story opens up with the news of the funeral of a peer of the realm. Then it’s revealed that the man has left an elder daughter, Lacilia or Lacy as she goes by, from his first marriage. His second wife and the daughter born to her, Sarah Jane, have also survived him. From the very beginning, it was apparent that the stepmother is very mean to Lacilia. She also has a grand plan to improve their financial situation and deprive Lacilia of her right, in her own twisted way.

When the Duke of Blantyre, Darlington, stops by to pay his respects, the evil stepmother brings out her claws and starts sharpening it. To make the long story short, the Duke was in some kinda business venture with the late Earl. He himself doesn’t have a financially strong background but the deal he made with the Earl suggested if there’s any trouble on the monetary side and he can’t pay his due, he’d have to marry one of the Earl’s daughters. Unfortunately, Darlington was out of luck. When he says as much to the widow, she promptly starts reminding him that he has no way out of it. But she’s willing to listen to his pleas once he marries Sarah Jane; her dimwitted daughter.

The Duke is not only shocked and angry but also simply aghast by this proposition. I mean who marries an ugly looking, completely brainless girl who can’t even tie her shoe-laces (you bet that’s exactly what he thought of her)?! By then, he’d also met the beautiful daughter, the ‘good’ side of the family, blonde beauty Lacilia. After that, there’s no way Darlington is marrying Sarah Jane. But Lady Luck has decided to turn her face away from him, so after some odd happenings, he gets the news of a mining accident which had the makings of a disaster of immense proportion. Darlington, it seemed, had no other option but to give in. This latest mess is most probably going to ruin him completely and if he doesn’t marry Sarah Jane, he’d be breaking the contract.

But how can the Duke manage to avoid this mess and marry Lacilia instead? After all, it was her he wanted, not Sarah Jane. That’s where the story gets weird... just how weird, read to find out.

Now to my thoughts. The story bugged me from the beginning with its melodramatic narratives, dialogues and characters. But let me tell you first that Roxy Soule’s writing style is admirable. I don’t mean to be harsh or anything but the rest was just not my thing.

2. The tone of story felt more Medieval than Victorian. I don’t know if it was because of the narratives, the dialogues but that’s how I felt throughout. Had there not been the mention of coal mines and railroads, I’d think it’s a medieval romance.

3. The distinction between good and evil was very black and white, almost child-like (‘dark’ is always evil; the stepmother, while ‘fair’ is always good; the blonde Lacilia). This was definitely not the children’s version, so why?

4. The most disturbing portrayal of all was of Sarah Jane’s, and not because of the reason you’re thinking. Sarah Jane was clearly a woman with special needs. Even if I consider the fact that people back then weren’t as conscious about it as today, it galled me still to see her treated so abominably. I found it most appalling the way Sarah Jane was portrayed to be an ugly caricature with bulbous eyes, big nose, yellow teeth, reddish skin and big forehead with matted dark hair; a perfect companion to her evil mother! Someone to be pitied at, rather than sympathized with. At times it was disturbing to go through the description because there was no sympathy in the tone. Every time Darlington or Lacilia or both had an uncharitable thought about her and her ‘pitiable activities’ (and they had plenty!), I couldn’t help but shake my head. That doesn’t exactly put either of them in a positive light, hence not-so-good in my eyes. After all, it wasn’t Sarah Jane’s fault that she was born this way. Plus, she wasn’t your proverbial evil stepsister; someone who has no other deformity of any kind except for a cruel mindset. She just seemed like a child trapped in a grown up woman’s body and so, very easily influenced by her mother. In the end, Sarah Jane was very conveniently ‘married off’ to the fat stable master’s son so that Lacilia can marry her Duke. She couldn’t tell the difference so what does it matter, right? *SMH*

And there it is. I tried my best to ignore these things but I simply couldn’t. But I’m not saying this is exactly how you’d feel when you read the story, so you may wanna go ahead and check it out for yourself. Personally, not sure I’d be picking up the next installment. 3 stars.


I received a review copy of Tight Laced from Goddess Fish Promotions as a part of the Tight Laced book blast, August 11, 2015 in exchange of an honest review.