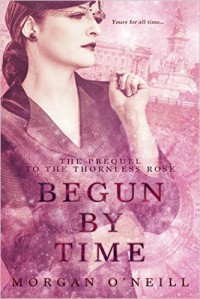 Morgan O’Neill’s latest offering, Begun by Time, was a lovely prequel to The Thornless Rose (Elizabethan Time Travel #1). TBH I’m not a big time travel theme enthusiast (I have my reasons) yet this series got me hooked since I read the blurb of book 1. I’ve enjoyed it so thoroughly that I’ve been eagerly waiting for the next installment...

The Thornless Rose begins at 1945 when Dr. Jonathan Brandon, a member of RAF in his early 30s, goes to a favorite inn of his for a bite, where he simply vanishes into the thin air. At that time, he was engaged to Catherine Hastings, their marriage only a handful of days away. No clue was ever found as to what happened to him, including his body. There were wild speculations about his disappearance, though nothing was ever proved; just how can a living, breathing man vanish into thin air!

Years have passed since then. At present time, Anne, Catherine’s granddaughter, is visiting London to spend some quality time with her 80+ yrs. old grandmother. She had no idea of Catherine’s past and her association with Jonathan, who went by as ‘Jonnie’ to his loved ones. This seemed like secret that was just waiting to be unearthed when Anne finds the hidden boxes full of articles and documents in Catherine’s attic and becomes instantly intrigued by this mysterious, yet fascinating story of the missing RAF Doctor Brandon. Surprisingly enough, her now deceased grandfather Arthur’s involvement was also prominent in the investigation. From there, before Anne could even take everything in, an incredible journey is put into motion for which she was in no way prepared. She certainly didn’t thought about being thrown 400yrs. back in time where she’d be able to meet Queen Elizabeth I, in search of Jonathan. Neither did she ever think that not only she’d find him, but also fall in love with him madly.

I’ve never been particularly interested in the history of Tudor England. Apart from its contemporary setting, this novel connects and heavily relies on that without being made to feel like taking a History lesson. The fusion of the historical facts with the fictional was done very well. In the course of the story, some key historical figures such as Robert Dudley, Thomas Howard, the first Duke of Norfolk, Lettice Knollys, not to mention the venerable Queen Elizabeth I, were introduced. They played their roles as needed throughout, which is why I had to research online to find out who was who and how they were connected. The authors’ knowledge of Tudor history was admirable.

I won’t spoiler anymore as The Thornless Rose was absolutely brilliant. But honestly speaking, I didn’t think I needed to read any backstory per say because whatever was told there was enough for me to piece together a timelime of the incidents since Jonathan’s disappearance. Even though the story largely jumps to the present time and then proceeds to narrate the terrific adventures of Anne and Jonathan (including some great smexy times ;)) full of lies, betrayal, plotting and murder, enemies who came to haunt Jonathan more than once putting his and Anne’s life in danger. In short, every Tudor court intrigue imaginable. The story ends in sort of a cliffhanger. Not the type where the story abruptly ends, but just that there was no resolution to Jonathan and Anne’s fate. We had no idea if they’d be permanent residents and guests of Queen Elizabeth I or would Catherine have a chance to see her beloved Jonnie once more.

I know some had a problem with Catherine and Jonathan being engaged but TBH, the whole premise of the story was so very complex that it didn’t bug me as much as I thought it would. Besides, even though they were engaged, Catherine and Jonathan were never lovers. This and much more is explained in the prequel, Begun by Time, shedding lights on the events that has gone on before Anne became an active part of it.

Begun by Time starts in midst of the destruction of WWII. Catherine was just a young girl in her early 20s, working as a volunteer with some of her friends, under the friendly but watchful eyes of Rose Brandon. When Rose dies in a tragic bomb blast, Catherine, a witness to the whole thing, becomes despondent. It’s on her funeral that she meets Rose’s whole family; her husband Nigel and son Jonathan, who was already an RAF Doctor. Jonathan was recovering from a wound of his own, something Catherine has heard, alongside many other good things about him from Rose. The small yet loving, tight-knit family of 3 was devastated by Rose’s passing and there was nothing Catherine or anyone else could say or do to console the bereaved father and son.

Yet from there, with Catherine’s own small and tight-knit family of 3, forms an attachment; the friendship that she had with Rose extended to Nigel and Jonathan. Catherine’s mom and dad accept this and Nigel and Jonathan become regular guests at their humble abode, and vice versa. With war still raging and deaths everywhere, both Catherine and Jonathan very soon come to realize that they don’t want to waste anymore time to take their friendship to the next level. With both their parents’ blessings they even get engaged.

But what Jonathan never confided in anyone was his secret troubles; flashes of pictures and scenes that he’s been getting ever since his head injury. He’s been distraught as it is, in no way wanting this to hinder his relationship with Catherine. I’ve always wondered why and how Jonathan got entangled in the phenomenon of time travel and where does Catherine’s own family falls into this whole scenario. For that matter, why Anne was the one pulled in and not Catherine. Where is that link? Even though I didn’t get a complete picture yet, we had an answer to Jonathan’s entanglement. All it took was a tour to a museum...  When he suffers an ‘incident’ there, Catherine and Nigel become very worried. It’s then Jonathan decides to tell them about the flashes of olden times and a sensation of zoning in and out of the present time where he feels himself almost vanishing!

Catherine, though not sure what’s going on, is very understanding, her only intention to be supportive. With her encouragement, Jonathan begins seeing a psychiatrist just to be on the safe side. Things even seem to have been going well for a while, not only where Jonathan’s condition is concerned but also, their blooming relationship, with the plans for their upcoming nuptials full on. The time is set at the New Year’s Eve of 1945. Unfortunately, it’s then the unthinkable happens, shattering Catherine’s happiness into millions of pieces. I knew what was going to happen, even that didn’t help the dread I felt knowing what’s to come next. Simply put, it felt like the death. Jonathan missing, no words of where he is, his body never found in the next months. The police giving up with many dead ends and wild speculations of him ‘vanishing’ into thin air. Nigel broken-hearted again, losing his only surviving loved one this way, never knowing what happened to his son. Though Catherine and her family tried their best, he gave up on living and finally slipped away a year after Jonathan’s disappearance. Those few chapters were full of this never-ending barrage of sad events, one after another. The war had come to an end right before the disappearance but it seemed there’s no happiness in Catherine’s life. It felt as cold and empty as it was before she met her dear Jonnie.

Fortunately, finally in 1947, things began to turn around for her. The memories, though they still haunted her, Catherine was trying to pull through. She was eking out a life for herself though she didn’t know where it’ll take her to. Certainly not to Arthur Howard! It was a chance meeting that clicked on spot and Catherine is once again swept away by the beauty of love and friendship from another beautiful spirit. At first, she doesn’t tell him about Jonnie, scared how he’d interpret the whole incident. But Arthur is a lawyer. He’s also rather good in what he does. There was that notion that he may even have been a spy for the government, nonetheless, has great influential friends in the upper circles. The point being, Arthur Howard, though young in age, is more experienced in the ways of the world. And he doesn’t shake and give up or give in that easily by a disturbing, seemingly implausible incident.

There were times when Catherine was greatly reluctant to Arthur’s suit but that wasn’t because she had no feelings for him. It was frustrating but understandable seeing her brush with misfortune. She was scared of losing the man she loved for a second time. Arthur understood, which is why he was a total keeper. His understanding and patience all the while helping Catherine find answers, not to mention his interest of opening up the investigation and getting involved personally if only to make her happy was so exemplary that I couldn’t help but sigh a little. There was a hint that Arthur pursued it for a long time and not entirely without result. They do find a link to Jonathan with inkling to what might’ve happened to him. You’ll find the mention of this ‘link’ both in here and in book 1, where it played a major role (I just loved connecting those dots!). No doubt, Catherine needed Arthur’s support big-time to finally put the past behind, move forward and grab the happiness that beckoned them. She knew Jonathan would always have a place in her heart, but Arthur was her true love, her future.

As mentioned before, though I didn’t think I needed a backstory, the authors proved me wrong because I absolutely enjoyed reading Begun by Time and think I would’ve missed out on knowing Catherine and Jonathan’s life together if I hadn’t. I would’ve missed out on the life in and after WWII and how people were coping with the life-altering situations that they were put through. In fact, would’ve missed out on how Catherine coped with Jonathan’s disappearance, definitely her meeting with Arthur and the events thereafter. The narrative also gives a nod to the Classic films of that era. It was so well-done that I couldn’t help imagining the whole story playing out as one. In the end, it all mattered because this prequel helped me get a good idea of the storyline in general and whetted my appetite for what’s to come in the final installment of the series, Ever Crave the Rose.

You can read Begun by Time either before or after The Thornless Rose. Whatever it is, it won’t hinder your enjoyment. But be sure to pick up book 1 too if you want to know more about Jonathan’s fate and how Anne found her fate entwined with a man who was robbed off a future with her grandmother. Trust me, it’s as intriguing as it sounds. 4.25 stars.

I received this ARC, courtesy of Entangled Select, via netgalley which didn’t influence my review and rating in any way.