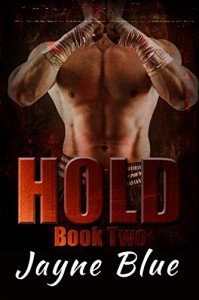 Hold 2 of Hold Trilogy by Jayne Blue went so off the track that I’m not even sure how I finished it. I liked book 1 quite a lot so I was very excited to finish the trilogy. Each installment came out a month apart and even with those irritating cliffys, I could barely wait to read. Unfortunately, this time wait hasn’t been worth it.

Just to tell you first that I absolutely despise love triangles as more often than not it ruins the story for me. Either a completely good person gets hurt in the end, or does something to try my patience and I keep wondering why on earth this individual is even a part here. I don’t always see the point of a love triangle and try to avoid any book containing it. The first installment, Hold 1, gave a hint of a building like that and I got apprehensive instantly. My apprehension was due to the fact that the third member of this triangle was more infatuated than in love with the heroine. Or so I felt he was. I was hoping for a smart way to tackle this unfortunate buildup but the author completely messed up in this installment. If it was done to create angst and intrigue, it failed quite royally IMO.

In book 1, we meet this orphaned girl Cassidy who was desperately looking for a job when she finds one as an assistant in a gym called Great Wolves (GWG). It’s a gym which trains MMA fighters. She’s quite brilliant and soon Cassidy shines in her job, helping Whitey, the ancient trainer with anything that needed the help of technology like computer, to handle it.

Cassidy also makes friends with the fighters of the gym, who were tickled to have a young (and only) girl among them. One of them was certainly too interested in her! Craddock Flynn is the best among the bunch and has a top notch ranking in MMA world. He hasn’t been beaten yet. His close rival is Zeke, who comes only second to Craddock’s first. Craddock is as dark and broody as Zeke is fair. He has this all around ‘good boy’ vibe around him. He’s called The Preacher’s Son for a reason, as his father is one. He has a big support base too and charms Cassidy with his smiles and jokes, while Craddock is basically a loner. But no matter what Zeke does, Craddock has already staked his claim on Cassidy. She seemed much more inclined to Craddock’s dark sexual appeal, though she doesn’t let Zeke out of her sight either. After all she thinks he’s a ‘good friend’ and becomes quite intimate with him too.

This was such a bad idea as Zeke and Craddock had this epic rivalry. They would do almost anything to beat each-other down, use techniques to hurt each-other too. While Craddock was private, his only vulnerable spot now was Cassidy. Craddock is a family man, who absolutely loves his mother and autistic elder brother Dylan. Now he was in love and there was no turning back for him.

Even though she starts sleeping with Craddock almost as soon as they met, Cassidy would flirt with Zeke as well. Craddock would get jealous and mad, which annoyed me a lot. I didn’t like his caveman-ish behavior in book 1 but he was right to have suspected something about Zeke as I found in the end. Cassidy on the other hand, it seemed would always take Zeke’s words over Craddock’s. She claimed she loved Craddock but felt smothered by his possessiveness, which would create conflicts more often than not. Zeke would also goad Craddock from afar, which either Cassidy doesn’t notice all that much or she’s plain dumb. I liked her but after book 2, think I’d have to agree with the later.

As the drama regarding ‘who would get Cassidy’ plays on, they also get ready for a big championship. The winner of this championship would get an offer of a lifetime which would surely launch his career as a professional MMA fighter. Then there was the insane amount of money they always dreamed of earning. Craddock wanted to win because he was thinking of taking care of his mom and Dylan and he wanted Cassidy’s support, who seemed supportive too... But then things go horribly wrong, thanks to Zeke once again.

Very unsurprisingly its Craddock and Zeke face in the final. Cassidy finds herself in a dilemma about whom to support. Zeke keeps nagging her to leave Craddock to be with him and if Cassidy ever said ‘no’, there was no conviction in her statement. She was forever confused, plain and simple. She had no idea what she wanted from either guy. So in the final Zeke strikes in the nastiest way possible to goad Craddock as he always does, to do something drastic to ruin his career and manipulate Cassidy to his side. It works like the charm! Too many misunderstandings after that and Craddock and Cassidy split up right after the final. Zeke is “injured” by Craddock and all Cassidy’s sympathy now lie with Zeke.

Craddock, on the other hand, is given a wild card on a TV show about MMA fighters. He takes it, flies away to film. It was tough for him to leave Cassidy but he was sure she wanted Zeke over him, while Cassidy thought he spend night with some other girls to shake off his disqualification from the match. It was an overly silly misunderstanding but there it was!

There book 1 ends, leaving me really anxious about what’s going to happen next. I was sympathetic towards Cassidy even though it seemed Zeke was successful in taking her away from Craddock. And I was right. Cassidy doesn’t even think twice before jumping into bed with Zeke, that too in about 2 weeks into her ‘break up’ with Craddock. Zeke was obviously the rebound guy even if he was trying to convince Cassidy that he ‘loved’ her. Did she even feel anything remotely like love for Craddock? I didn’t think so.

It seemed she and Zeke were together for about 2/3 weeks when Craddock returns to his hometown for a visit, courtesy his new TV show. They were filming a family oriented episode for each player, hence the return. Craddock was having a ball in there, even if the thought of Cassidy hurt him. So far, he’d only blamed himelf for everything and thought there was no chance for him to get her back. Would that he knew how easy that would be! What Craddock didn’t know but guessed that Cassidy was already humping Zeke. He was also unaware that that in the filming of one of the episodes, he’d been set up by the TV producer on a secret scene where he was drugged, all because they wanted more view and ratings. As if Craddock’s life didn’t have enough drama going at that moment! ;-s

Now back to Cassidy and her clueless self. The moment Craddock is back, her va-ja-ja begins to croon his name once again, Zeke can go take a hike. In fact, in about 2 days, she dumps Zeke and sleeps with Craddock once again because ‘she realized hadn’t gotten over him yet’. Also because FINALLY Craddock tells her about Zeke’s nasty stunt on that final, giving her the perfect excuse to break up with him. OMG! If I was absolutely disgusted by her sleeping with Zeke so soon, I was annoyed as hell at this. I mean WTF?!! Can’t these idiots find another girl? She has repeatedly proven herself to be a person of bad judgment, lacking the brain where relationships were concerned. To make it worse, she didn’t seem to be interested in any of them exclusively at all! It was very obvious that sex was all she wanted with whomever (Zeke or Craddock) was available to give it to her! She claimed to be the type who wanted relationship... really??!

But that’s not all that made me so mad. After they sleep together, Craddock, who was superbly happy to have his girl back again with him, this time was letting himself be manipulated by Cassidy. She wanted to keep this hush-hush as if she was embarrassed to face that she’s *back with* Craddock, whereas he thought with TV show and all, this would protect their privacy. However, since she also dumped Zeke, everybody in the gym more or less knew that she’s now humping Craddock once more. Zeke was angry and I knew he’d be trouble. He keeps pestering Cassidy with the same sob story of his love and what he did to ruin that final was to get her, for their relationship as *he* thought she’s better off with him than Craddock bla bla bla bla bla (kill me now!). He even manages to soften her up where she’d again chat and flirt with him, hug him in the plain view of Craddock, who would try to contain his anger because he’d promised to “trust” her this time. What he did to Craddock was forgotten. Just.like.that. WOW!

Poor guy. Craddock was doing everything in his powers to keep Cassidy with him... until that freakin’ episode where he was set with another girl airs. This time Cassidy gets a slap right on her face, though her brain remains asleep. She accuses Craddock of CHEATING on her, stomps away, then breaks up with him again.

Hypocritical much, hmm Cassidy? How is it cheating when YOU broke up with him in the first place before skipping off with Zeke? How can you even dare to accuse Craddock of cheating when YOU WERE THE ONE f*cking another guy at that time? So in that “break up”, when you sleep with someone it’s not cheating and if he does, it’s cheating? Seriously?????? You string two guys along, play with them never giving them any specific answer. You never could make up your mind between the two. Now you do and say whatever you wish? I was so stunned, shocked...... flabbergasted by her holier-than-thou attitude, trying to accuse Craddock. It was stupendous. He was again left with guilt because he had no idea what happened until much later in the story. Even then, he held himself guilty for f*cking things up again. Bravo on making him feel like sh!t once again! Honestly, I wanted to beat her up for even opening her mouth about cheating. BITCH!

Seriously guys, there are other, smarter women out there. Go find one and leave this loony, dumb bitch to her clueless and self-centered little self! Then again, I despise Zeke too. So much for “Preacher’s Son”. My foot! He and Cassidy deserve one another actually. I wish the author would make these two disappear and pair Craddock with someone who deserves him. That girl Julie who was also as much a victim of that video set up as Craddock, I think I like her.

Unfortunately, the way book 2 ended, it seemed Craddock has made up his mind to win Cassidy over... yet once again. I can’t even begin to imagine why. Seesh!

2 stars but barely made it. Hope I’ve explained my utter dislike of this installment, which made me leave this story off for a long time before picking up just to finish it. Have to specifically mention the numerous silly typos throughout that shouldn’t have been in a published book, more so on one that’s priced almost at $4.

I’m not even sure I wanna pick up Hold 3 since I’ve all but lost all my interest. A good story gone to waste. What a shame! I don’t even know what the author was thinking!