Unmasking of a Lady 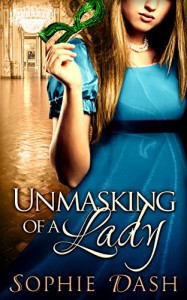 Unmasking of a Lady by Sophie Dash was "read now" in netgalley. I was looking for a new author to try and this seemed up my alley. I went in completely blank, not knowing the author or reading any review prior to it. In a nutshell, here's what I found:

The heroine, Harriet, is from a good family though her family is now on the verge of financial ruin. I think her father and younger brother, Giddeon, the heir, both had a hand in this. They have a very wealthy, widowed maternal aunt who loves them like her own, yet Harriet won't take any 'charity' from her. So she comes up with the idea that she needs to be a highwayman to save her family from the financial ruin.

Now, you may ask, why not marry well and do the same? Harriet is quite attractive and has had proposals in the past, yet she seemed very oddly reluctant to marry. She, plainly put, abhorred the notion of being leg-shackled. She hated the fact that some man would control her life. She loves her independence a bit too much (all that highwayman business couldn't have been concocted without it). After her mother's passing, Harriet has been the head of the family, or so to speak, since her father wasn't up to the task all that much. She took care of everything. Yet, Giddeon went spoiled, piled up more debt and almost ruined the family name in the process. Then Harriet took it onto herself that she must mend the financial ladder of the family. She won't accept any help from anyone, not even Giddeon when he finally came to his senses and wanted to help.

It should've been admirable but for me, it wasn't. First of all, the idea of being highwayman as the 'only' solution to their financial problem. Seriously?? It seemed quite farfetched to begin with! And I tell you that this brought numerous problems, life-threatening dangers, to their doorstep. Then Harriet's refusal to accept their aunt's help. How is it exactly 'charity' when a loved one is more than willing to help? I had no doubt that Aunt Georgia cared for them all very much. In the end, Harriet was forced to take the help anyway when all her plans failed miserably. Then I thought, she treated Giddeon too much like a kid instead of a man in his early 20s. She was forever unhappy about Giddeon's irresponsible behavior, yet when he wanted to help, she won't let him. She couldn't rely on him at all and let it show every step of the way. That alone can derail a person who is trying to get back in track. I didn't like it, especially in the light that none of Harriet's own plans to salvage their finance and reputation, worked perfectly. Had it not been for Major Roberts, our Knight in Shinning Armor, she would've been caught, tried and hanged for her crime. Harriet was quite prepared for it too, but how would that have helped mending their family's reputation? I have no idea.

Now, I really liked Major Roberts, Edward. He was all that you'd call a gentleman. An ex-solder who is also a fearless leader of men. He was initially appointed to catch the elusive Green Highwayman (aka our h) because he was good at his job. In that ball, where this was announced, is where Harriet also met Edward for the first time. Meeting him almost shook her resolve to stay a spinster, until she knew he'd be the death of her-- quite literally!

The whole book was riddled with either one of Harriet's farfetched plans -- some of those either went wrong or she blundered through -- or mountains of misunderstandings between her and Edward. She pushed him away at every step of the way, which she thought was for the best. Well, she was hiding this colossal secret from him to begin with; another reason why she couldn't contemplate marriage. This time, the irony was that she wanted, craved, Edward, who returned that affection. He's just the type of man she could dream of being with. Yet, that was not to be. Since he didn't know the exact reason for Harriet's rejection(s), Edward repeatedly got hurt. And when he finally learned the truth of her connection with the Green Highwayman, he was just devastated. He felt betrayed, and I couldn't blame him. Gradually he decided to stay away from her. Gosh, I was so frustrated since Edward was the one who confessed his feelings first, not the other way round. Even till the last chapter Harriet had a problem confessing her feelings. She was very distrustful, then scared of what's to come. She didn't want Edward involved in her business, yet he got involved anyway.

It was also Edward who finally rescues Harriet from another of her mess and caught a bullet in the process. And it's not the first time he got hurt in the story while saving her. He didn't need to jump in after the way she kept pushing him away, yet he did. Because of that, I had no doubt of his feelings. There was one scene where he even questions his own sanity; of doing things he would have never done before meeting Harriet. But I guess falling in love does that to people. He even made sure that someone else takes the blame for the crimes of Green Highwayman so that no one connects anything with Harriet, ever. Harriet is one lucky girl!

I didn't dislike the book per say. I wanted a few more chapters of Harriet and Edward together because they barely got any chance of romance. However, Harriet was exasperating; she would be the reason why it took me a long time to finish this book. I tried to like her, but I kept shaking my head at each of her "plans". It's not that she was featherbrained. In fact, she was quite serious in her quests. She, indeed, believed she could help her family; save her brother from a certain death and her sister from a certain ruination. But she didn't think before leaping. Didn't think twice about the ramifications of her actions, and those were quite massive. People got hurt and killed for crying out loud! That she acknowledged that fact later in the story told me she was smart. Just not prudent enough. Maybe if I knew what drove her to think that becoming a highwayman was the only solution, I may have been able to justify her activities. But since there was no explanation, I couldn't. She put people in danger and it was not funny. I wanted to applaud her courage but I got caught up in every blunder she made along the way. And I couldn't agree more with Edward when calls her actions "idiotic" somewhere in the story. He knew Harriet better than anyone by then.

I liked Sophie Dash's writing, and I thought she brought a good spin by giving us quite a different heroine. She did a great job IMO at portraying Harriet's character, faults and all. Only it wasn't my cuppa, hence the 3 stars. Saying all that, I do want to see if Giddeon gets his own book or not, even Ellen, their youngest sister.

This ARC was set as "read-now" via netgalley, thanks to Carina UK, which didn’t influence my review and rating in any way.