All A Mistress Wants 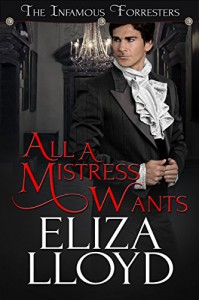 This short novella from Eliza Lloyd, first in The Infamous Forresters series, was delightful. It was pretty short at 36 pages, yet the author was able to give me an HEA that left me smiling and wishing the couple in question all the best.

Mistress-themed stories can be a bit tricky for me since I don't know which author can pull it off well enough that it won't leave me uncomfortable. Especially if the H and h has started their relationship as an affair and such. I remember reading another story where the h was a famous courtesan and the H was obsessed with her. He bought her favors after waiting for years for her to become available. When the story started, they were already lovers for about a year or so. Despite my doubts, I ended up really liking it, kudos to the author. Though not all, All A Mistress Wants progresses somewhat in the same vein which is why I kept thinking of that other book.

Adam, the Duke of Sterling, has lost his beloved Nellie 5 yrs. ago, leaving him and their 4 children bereaved. It was said that she was the love of his life and no one can ever replace her. What people didn't know that he's been discreetly seeing another woman for the past 4 yrs. He has grieved but Eloisa was a temptation he couldn't deny. Yet it wasn't just another fling or a lusty affair because Eloisa isn't your typical mistress material. She's a gentleman's daughter fallen on hard times. She's smart and beautiful, an excellent companion in all regard. Adam had helped her and she wanted to repay that debt... He has been crazy about her ever since. I could see Adam was the type who would be devoted to any woman who kept him enthralled, which Eloisa had and he hasn't even thought of another woman ever since their arrangement. He kept her like he'd keep a wife, only she wasn't his wife in paper.

Yet for Eloisa, she felt like Adam's wife in every way that mattered. What started out as the show of gratitude has formed into something precious and deep in the past years. At least on her part. It wasn't supposed to happen, yet it has. Eloisa was hopelessly in love with her Duke, though she knew to him, she's just his mistress.

Regrettably, there wasn't any description of how they met, the other details of the beginning of the affair so I'm not sure about Eloisa's past. Not a lot was said on that regard for either her or Adam. All I knew she was the daughter of a gentleman, and the niece of one of Adam's old family friend of sort. There shouldn't have been an affair to begin with but Adam and Eloisa both wanted each-other enough to make it happen.

After 4 yrs of wanting and yearning, Eloisa wants more. She wants more regards from her Duke than just an ever available companion and lover. Oh he's generous to a fault in bed and out, but that wasn't enough anymore. But she knows she can't expect "more" from the Duke of Sterling, who'd eventually marry somewhere suitable to his aristocratic breeding and status. So, even if her heart went against it, Eloisa has decided it was time to say goodbye.

After a night of passion, Eloisa's announcement leaves Adam flabbergasted. The thought of a breakup didn't even cross his mind. Yet here he was, standing in her room, not knowing what went wrong... All he knew he had no intentions of letting her go. But the question was, was it for now only? If not, did he want to keep her forever? How the hell can that happen? Obviously he was of a mind to keep her when he remarried but even that wasn't an agreeable solution since he himself couldn't think of her being with another man. What a dilemma!

To keep Eloisa in his life, Adam must think through and come to a decision by asking himself the most important question of all; what does she mean to him?

In the end, my only complaint was the lack of background on both Adam and Emma. I also felt that there was something about Adam's first marriage and the notion of he being in love with his deceased wife. Eloisa was curious as much as I was. Adam wanted to talk about it, then decides to leave it for another day. I wish I knew what it was. No matter, I finished the story with a feeling of warmth that can't be said for many novellas out there. Obviously, Adam was smart enough to not love slip out of his hand when he's been fortunate enough to find it once again. His formidable mother certainly approved! :D

The next installments would be of Adam's brothers, and there are 4 more of them! Have to say I'm quite excited to find out about the other Forresters. 4 stars for All A Mistress Wants.