Sisters of The Confederacy 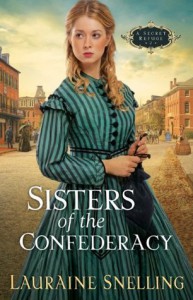 I had a difficult time finishing Sisters of the Confederacy; not because it was badly written but because of the subject matter which became rather monotonous along the way. And without any romance to smooth things over........ *sigh* But that doesn't mean I didn't enjoy it. I got hooked in Lauraine Snelling's A Secret Refuge series when I accidentally stumbled upon book 1, Daughter of Twin Oaks, which is now a freebie. The story narrates the arduous journey of Jesselyn Highwood, from her home Twin Oaks to different parts of Civil war-torn America, in search of safer grounds.

In book 1, Jesselyn, masquerading as a boy, was journeying with 3 of her freedmen, a freedwoman and her youngest brother, barely 3 yrs. old Thaddeus. Being the eldest daughter of plantation owner Joshua Highwood, who died of war injury, left Jesselyn with loads of responsibility on her 18yrs. old shoulders. Her mother Miriam had already passed away giving birth to Thaddeus some times before that. The wretched war took Adam, her eldest brother, the next Zachary being MIA for sometimes. Their biggest pride and joy were the thoroughbreds they reared in their stud farm, for which Twin Oaks was famous in the area. Joshua wanted his horses safe from the marauding army and Jesselyn had to take them somewhere safer, far away from Twin Oaks.

Before starting her journey, Jesselyn send her two younger sisters, Louisa and Carrie Mae, to Richmond to their Aunt Sylvania, so we get to see their stories simultaneously. Jesselyn journeys pretty much into the unknown, not knowing if her Aunt Agatha and Uncle Hiram, who lived somewhere in Missouri, were even alive or not.

Along the way Jesselyn, now called "Marse Jesse" to fit her masquerade, saw more destruction, pain and misery of the war that she ever hoped to lay eyes on. It shakes her strong religious foundation that their mother instilled in them very badly. She questions God's wishes, feels angry at His apparent whimsy at the suffering of His children. She feels that it shows He doesn't care much by letting the suffering going on for so long. Only Meshach, one of her freedman and friend, would tell her otherwise; that she shouldn't lose faith and continue to hope for a better day

The Highwoods' story continues in this installment as it was left quite hanging in book 1. Jesselyn found nothing but detruction in Missouri too. Agatha has been left destitute after Hiram's death; one of the first casualties of war in that area. Jesselyn now had one more mouth to feed in her little mishmash band of people, which now included an orphan girl named Jane Ellen and an orphaned infant named Sammy, both casualties of war. It seemed Meshach and Ophelia married sometimes in between the books, which was never mentioned, with Ophelia now in the family way. They'd also adopted little Sammy as their own.

On their journey, they had taken in soldiers as they found them, buried people after people and dodged several dangerous situations. One of those soldiers, before he went home, showed an interest in Jesselyn after finding out her sex quite accidentally. He promised he'd join them again in near future. However, after months of separation, Jesselyn had to come to the decision that it will never work. Sgt. White's last letter confirming him unable to keep the promise only solidifies that.

In the meantime, Carrie Mae had gotten married in Richmond and has found herself in the family way. Poor Louisa on the other hand continues her work as a volunteer nurse at Aunt Sylvania's, where they were keeping recuperating soldiers. When she was working in the hospital, she met a soldier, forming an instant attraction to him. Lt. Lessling seemed like the man she'd like to spend her life with. But he also had to go away on an urgent summon from home. At the same time, Louisa stumbled upon Zachary, unrecognizable with his severe head and other injuries. Even though he survives, he's not the same man anymore.

Zachary has lost a lot both physically and emotionally, yet Louisa, Carrie Mae and Jesselyn when she learns of it in one of Louisa's letters, are all too thankful to God that their brother was alive! By now, little by little Jesselyn's faith was being restored after months of counseling from Meshach. She was now in search of a wagon train which would take her to Oregon to start anew. They've received heartbreaking news of Twin Oaks being burned by the soldiers. After months spending in different caves to keep her people safe from the war, Jesselyn was a little desperate for a home and a hearth of her own. And she wanted her friends Meshach, Ophelia, Daniel and Benjamin to be as free as God made them. Oregon promised all that and more, including their own lands. They plan to load wagons full with supplies, then start searching for a wagon train to take them there.

In Richmond, Louisa receives bad news about her Lieutenant. It broke my heart to know that her dream of settling down would forever remain a dream as it was confirmed that a train wreck has killed Lt. Lessling. Even though I was quite sad, Louisa decides to fight hers by trying to become more helpful to the wounded soldiers, however much she could to keep her own demons at bay. Her heart would cry out for Gilbert but there was nothing to be done about it. Oh how I wish it wasn't true! I kept hoping for some good news as she did, until the last moment. :(

I was also losing hope for Jesselyn because the story in this installment is mostly centered around day to day activities detailing their living condition in different Missouri caves, among other things, which made the story a little monotonous. There were plenty of heartbreaking scenes, as here too, they had to bury people more often they'd like. Jesselyn's only dream was now to find that wagon train...

Fortunately, they find what they were looking for soon enough and meets the mixed-blooded wagon master, Gray Wolf Torstead. Wolf is part Sioux Indian, part Norwegian and probably got the best of both sides in his looks. :p  Both takes a dislike to each-other on their first meeting; Wolf thinking Jesse a weakling for "his" young age and slight built, while Jesse thought him grumpy and presumptuous. :D Of course, sparks fly but not in the way you'd think. At least, not at first... until he got to know the truth about Jesselyn's sex. I knew they were attracted to each-other but the story ended before that had a chance of transforming into something solid.

Sisters of the Confederacy also ends in a cliffhanger as the wagon train is on their way to Oregon. On the way, they can't avoid tragedies from happening. But it was also a time for self-discovery for everyone involved. Thaddeus remains the ever happy bundle of joy and energy who brings the necessary breath of fresh air in the story with his antics. I'd so love to see the siblings having a chance to be together again! Louisa keeps missing Thaddy. Her faith in God remains as strong as ever, though the war has taken it's toll. Knowing where Jesselyn is heading, Louisa keeps hoping she'd see her little brother and her sister someday; that God won't be so cruel as to separate them forever. They remain hopeful about returning to Twin Oaks someday, to bring it back to it's former glory. After all, all of Jesselyn's ordeal was for that one dream only. Only time will if their dream will ever come to pass. I feel really sad for both Louisa and Zachary; they deserve their HEA too.

As I stated in my review of book 1, this series is clean cut, Christian-themed so don't expect any steamy moments. There were a few kissing scenes but nothing close to a strong romance, let alone intimate scenes. But either way, Lauraine Snelling writes really good, wholesome historical fiction that'll surely touch your heart. I can't wait to dive into book 3 and the final installment, The Long Way Home, in hopes of finding some closure for myself, just as much -- I wish -- for the Highwood siblings. 4 stars.