Once Upon a Moonlit Night 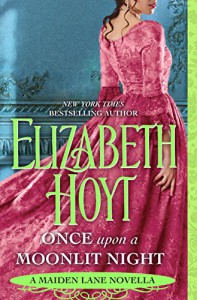 Once Upon a Moonlit Night by Elizabeth Hoyt is a novella (#10.5) in her long running, much beloved Maiden Lane series.

Over the years since it started in 2010, Maiden Lane has veered away from its original storyline set in the dark alleyways of St. Giles and its forays with a character named the Ghost. Even the original Makepeace siblings are seen sporadically on and off, gracing the pages with their presence, which I love BTW. To have a glimpse of their life after the HEA. Since book 5, the storyline has gone on to pair the secondary characters, giving them their own HEAs, except maybe for Asa, one of the more elusive Makepeace brothers who had his own HEA much later (in book 9) than his other siblings.

If you still haven’t read this series, I won’t recommend you read this novella at all. Not only the series itself is interconnected in most part with incidents and characters, this novella is directly linked to book 10, Duke of Sin, with some ongoing developments. So not a standalone by any means.

In book 10, the infamous Duke of Montgomery AKA Duke of Sin AKA I’m-so-hot-the-sun-shines-just-for-me AKA Dear Val does some blunders which leads to the development of this novella. He was... um, quite the mercurial character who loved to dance and make others dance on his whimsies. Even though Val or Valentine Napier, finally is conquered by this strict and prudish, yet brilliant housekeeper Bridget Crumb (who is now his housekeeper in every sense of the way ;) ), his kidnapping of the richest heiress of England, Hippolyta Royle, and the consequences thereafter, wasn’t quite over.

Hippolyta has been a very minor character, who made a few cameos here and there in the past couple of installments, is the richest English heiress with a secret that might ruin her chances of a suitable marriage. And the Duke of Montgomery, the most hated man in her eyes, used to hold that secret in his hands. Oh he even tried to blackmail her, which failed thanks to his canny housekeeper. But then he goes and kidnaps her, whisking her away to a faraway old and semi-abandoned castle that belongs to the Dukes of Montgomery. It’s not as if they were in love or whatever, and Val is filthy rich himself so it’s not about money either. Then why? The question has left Hippolyta baffled. Thankfully, Mrs. Crumb was once again her rescuer, who helps her get away, in the middle of the night, with an old and fat nag as her ride and very little on her back. But then she needed to make that escape ASAP to elude the crazy baboon AKA Dear Val (I’m sure that’s what Hippolyta thought of him by then :P).

Unfortunately, even though she was given a vague description of her destination, Hippolyta loses her way into a dark and cold rainy night. After an accident, the nag also abandons her, while a filthy Hippolyta is left to fend for herself. Things could’ve gotten much, much worse, had she not spied on a carriage going to its own destination at a breakneck speed. She was lucky enough to stop it, however would the passenger(s) within be kind enough to give her a ride to a safer destination, seeing she how doesn’t look like richest heiress of England anymore?

The passenger in question does... and thus beginning the odd contemplations of Mr. Matthew Mortimer, the newly minted Earl of Paxton, who has just returned from India to take over an Earldom he neither wanted nor needed. It was a burden, full of debts, but there’s no way Matthew could ignore his new responsibilities. He only wished he could! And now, he finds this beggar-maid, all alone this insane night, in the middle of a deserted highway, asking for help. And even though she looks like a drowned rat, a filthy one at that, she calls herself Hippolyta Royle, the daughter of Sir George Royle, the richest man of England! She even acts the part of the haughty heiress with her cocked head, looking down upon her nose (would’ve worked if he wasn’t taller than her, but still..........). Matthew could only laugh at her, HA HA HA! She makes stink eyes at him for making fun of her but whatever. What a joke! And he needed the laugh, mind you, after all that’s been weighed down on his mind.

Despite all that, Matthew couldn’t help but be drawn to the girl and help her in her ordeal. Maybe he can drop her off the next inn, from where she can catch her next ride. Or next idiot who’d believe in her tall tales. England’s Richest Heiress, my foot. Probably some actress down on hard times, looking for her the ticked to her next meal.

And so it started, Matthew and Hippolyta’s sometimes snippy, ofttimes funny, banters where they poke and jibe each-other, but can’t help feeling that odd attraction that should have no place there. Matthew thought it must be the result of a forced celibacy in India, while Hippolyta just thought him annoying (annoyingly handsome more likely but whatever. :D).

It would’ve gone on but Mr. Royle finally tracks his daughter down while still with Matthew. It would’ve been a bigger disaster had not Matthew confessed that he has a newly acquired title and an express wish to marry Hippolyta. And she thought at first thought it was about the money. But then, maybe it wasn’t. And the moment they got engaged, things rather started rushing........ A bit too rushed for my liking. :(

I’ll be honest, this novella started out super fun. I was absolutely LOVING H & M’s banters. I was already baffled as to why she was given a novella, when it always felt like Hippolyta will have a full-length novel! I still wish this was a full-length novel. I needed to see the building of their chemistry to a point where they couldn’t keep their hands off each-other. They were married off too easily, too soon and the problems they had about that secret of Hippolyta’s, were also resolved way too soon IMO. Their trust in each-other, while I loved it that they did it so easily, seemed rather unbelievable seeing how short their acquaintance was before their seemingly forced marriage. I really wish there were more chapters, more buildups and for crissakes, a more convincing villain. -_-

3.5 stars for Once Upon a Moonlit Night. Am I looking forward to the next installment? I honestly don’t know. Alf (if you’ve read the series you should know her) was never a character I thought should have a full-length book. She’s getting that so I guess I just have to find out when it’s out early 2017. Till then, chao.