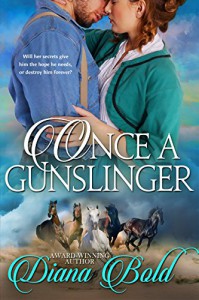 3 stars. There'll be no full review... so here's what I thought in a nutshell:

I liked another one of this author's books so I decided to give Once a Gunslinger a go. I do love western historical romances, and an outlaw hero can be very appealing for sure. However, this one disappointed me. I didn't like the hero, and didn't care much for the heroine either.

The H and the h had a past of some sort when they were young, and there were consequences of their relationship. The H went to war (Civil war I believe) and fought for the enemy side, leaving the h behind and his own family in peril. He has been sort of an outlaw ever since. There were other things too, but I won't mention them.

H and h met again years later, and that is where the actual story begins. Unfortunately, he was an a$$ who decided he liked being a jerk to the heroine for what she did to save her reputation so long ago. He wanted to make her suffer because 'he was suffering as well'. His grudge, she married his now deceased brother and didn't wait for him. -_- However, if you read you will see that the fault wasn't hers at all. She had to do what she had to do, and she wasn't even a good wife to the brother who obviously cared for her because she still loved the H. The H even realizes that at one point but keeps on being a jerk until the last couple of pages of the book. The h, I wanted her to ditch this a$$ and look for a better man. But she was still so enamored of him that she continued being a doormat and took what he dished out almost without any argument at all. I could NOT understand exactly why? WHY?! :/

Their romance was not convincing to say the least. Believe me, I tried but I failed to see any HEA with such a hotheaded, impetuous a$$ for a hero. In the end, the argument that he was being a jerk cause he was afraid to acknowledge his feelings didn't float my boat either. Not my cup of tea, sorry. 3 stars because otherwise, the writing was very good and I thought this could've been better. Also, I really liked some of the secondary characters such as the heroine's brothers. I'd be more interested in their stories!

Note that this is a reissue of the author's earlier work, Savannah's Hero.