The Danger of Desire 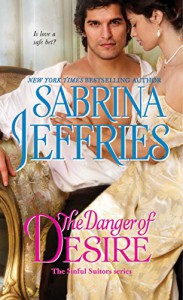 The Danger of Desire is book 3 of Sabrina Jeffries’s Sinful Suitors series. Can’t say I was too impressed with this one. This series, as a whole, has been a downer for me, both story and character-wise. But I am giving it a try, hoping that things will improve. *sigh*

I wasn’t surprised to find that The Sinful Suitors is connected to The Duke’s Men. Most of SJ’s series are interlinked thru characters; secondary characters of one series having their own books in a new one. I don’t think you must read The Duke’s Men to enjoy Sinful Suitors, however, the characters have links to the previous series so things may make more sense if you have already read the former.

The first book of the series, The Art of Sinning, is the story of a character appeared shortly in The Duke’s Men series; an American artist named Jeremy Keane. He was the cousin of one of the central characters there. I never thought him important enough to have his own book so this was a surprise! The heroine, Yvette, was never introduced before. Keane was running from a sad secret of his past eschewing his own responsibilities back in America, and his artistic whimsies gave him the perfect escape route to do so. He travelled extensively for the sake of his vocation and their vast family run empire is now managed by his elder sister Amanda. When Keane arrived in England, he was set to have a title from one of his English relatives as the next living male heir. However, due to some twists and turns and Keane’s own disinclination to take on added responsibilities makes him decline this in the end.

He meets Yvette through a mutual acquaintance, Yvette’s own brother, Edwin. They were thinking of opening this gentlemen’s club, whose purpose is to help protect the members’ female relatives from the lechers and fortune hunters AKA naughty suitors. However, while planning the club with Edwin and Warren, Edwin’s childhood friend, Jeremy meets Yvette who takes his breath away on spot. It was attraction at first sight for both. Jeremy even takes up on a portrait job for Yvette in hopes to... well, to acquaint himself better with her. Yet, he wasn’t ready to promise anything more. The whole push and pull and the melodrama of ‘should I’ or ‘shouldn’t I’ didn’t hold my attentions for long. It got too old too soon.

In book 1, we meet the h of book 2 The Study of Seduction, Clarissa, who is Yvette’s close friend. Though Clarissa was never introduced in any other series, Edwin was. Much like Jeremy, he was also a minor character of The Duke’s Men, having been engaged to one of the heroines for a short period of time. Poor guy was having a tough time getting a bride, and a jilt from his ex-fiancée wasn’t helping much. His family was already plagued by this huge scandal thanks to his ne’ee-do-well younger brother Samuel (the whole story can be read in book where Edwin was introduced). Yet he was nothing like Samuel, not even close.

Being the eldest and the Earl, Edwin has been the most serious of the siblings. Most brilliant and studious too. Edwin is very interested in automatons. He studies them, and makes his own versions of various things. Everybody thinks Edwin is starchy, quite prudish; in other words, too uptight. Certainly, the jolly and flirty Clarissa thought the same thing about her childhood crush. Oops but yes, she has had a crush on him for a long time. But since Edwin never showed any interest in her, she had never let her own interest show either. Their chemistry was hot and quite fun and I enjoyed their book a lot.

I read book 1.5, The Heiress and the Hothead, after book 2. It was the story of Jeremy’s sister Amanda and Warren, the Marquess of Knightford’s younger brother, Stephen. The whole story was too rushed for my liking, taking place in and around weeks of one Christmas. You can skip that one cause this little novella doesn’t really connect books 1 and 2 in any way that matters.

Now, Warren wasn’t a character I was keen on at all from the previous installments, much like Jeremy Keane. He was one of those secondary characters, a happy-go-lucky rake, that I tend to ignore for the most part. BUT there have been times when I have reconsidered my opinion of such a character when I read their book because they made me change my mind. Ms. Jeffries has a few wonderful examples of them in some of her earlier series. Warren’s book, The Danger of Desire, unfortunately didn’t blow me in any way. For the longest time in the story nothing interesting was happening. Nothing that I cared about.

Delia Trevor, daughter of a known gambler and sister of another gambler who recently passed away, was bend on revenge. She was also a completely new character that I don’t remember from any previous installments. Her brother, Reynold, had died a year ago by mysterious drowning. Some say it was accident, some say he was murdered, while some say he committed suicide when he lost all his money and land in gambling before he died. Delia though, was almost certain that it was the latter. Reynold was pushed into committing suicide because before he drew his last breath, he confided in Delia about a man with a tattoo on one of his arms, who was responsible. The story surrounding his death is kinda vague throughout. How was it that Delia was able to talk to him and glean that info, while his wife and Delia’s SIL, Brilliana, to this day had no idea that Reynold committed suicide? Delia lied to her, and everyone else, for the sake of preserving their already tattered reputation. Their finance though was an entirely different matter. Things were falling apart and Delia had to do something to save Brilliana and her only nephew, little Silas, from going to the poorhouse. She will try her best that that day never comes.

Delia had no interest in marriage so her way of trying to kill two birds in one stone was...uh, masquerading as a man and gamble in some of the most unsavory gambling places in London. She was good and meant to make complete use of it. That way, she could also ‘investigate’ Reynold’s claim about a man with a tattoo, which wasn’t a very common occurrence among the Lords who frequented those gaming hells. It should be easy enough for her to find the culprit, accost him, then blackmail him into returning Silas’s fortune. Easy peasy, right? *eyeroll* She was doing fine until she visited one of Clarissa’s balls and met the annoying Lord Knightford. She loves Clarissa as a good friend, but her very unsubtle attempts at matchmaking were making Delia’s life hell. All she needed now was Lord Knightford on her a$$ and ruin her ‘flawless plan’!

Little did she know Warren already was on her a$$, both literally cause he admired her wide hips *heehee* (another thing that makes me wonder how did she ever pass as a man :/) AND, he wanted to find out what she’s up to after discovering her ruse one night rather accidentally. Warren would show up, taunt and teaser her, letting her know he knows it’s her, later demanding she confide in him about her woes. Most especially why the hell would she spend her nights disguised as a man, gambling away? After all, Clarissa had requested him to keep an eye on Delia, who was not accustomed to the fast London life.

I always forget that they have that Club to save debutantes from naughty suitors because it’s so rarely mentioned, so there was that, and Warren took it on himself to become Delia’s unwanted guardian of sorts, much to the glee of her Aunt who has been trying to get her a match since the day she arrived. Brilliana was also delighted knowing Delia will be married. After all, a Marquess is courting her (as Warren wanted it to look like)! A very happy news for Trevor household. But, Delia knew of Warren’s intentions. Though she was still annoyed at his high-handedness, where he was trying to stop her from going forward with her plans (he was duly worried but Delia won’t be swayed by reason :/) she couldn’t quite completely dismiss him either. She was already attracted to Warren but had no interest of getting involved with him, or any man for that matter. In her experience, marriage wasn’t a happy place if Reynold and Brilliana’s was an example. Delia would like to stay far, far away from that, thank you very much!

Unfortunately, the lout called Lord Knightford wasn’t making things easy for her by any means. Warren was definitely attracted, and even though he’d rather eat sh!t than marry, he was somewhere between ‘yay’ and ‘nay’ where Delia was concerned. Plus he had a little secret that he didn’t want Delia to know for, he was scared that it may unman him in her eyes. It may have been the reason why he never thought of settling down before. I thought the secret was ridiculous but I tried not to judge him overly much for it. Fate helped them with a push when Delia and Warren find themselves compromised one day in a house-party, caught by Delia’s Aunt herself. Oh boy! Now there was no escaping for either Warren, or Delia. Thankfully, it turned out neither of them wanted to escape from this match. ;)

And there it went, they marry and fell in love right away. They were already half-way there while playing their little game. The mystery surrounding Reynold’s death was unraveled soon too. It was rather underwhelming seeing how easily it was solved. In another part of the story, Brilliana meets her one-time love, Niall, all of a sudden and everybody is left mystified by that encounter as both denies to explain any further. Niall is Clarissa’s brother, who was in exile for quite a few years for killing man in a duel. He returned from exile in book 2. The reason behind the duel can also be found in the same book. He was only trying to defend Clarissa’s honor but, much as Brilliana, not many knew the real story behind it. There were rumors, and that was that. Fortunately, we will be finding out what transpired between them in the next installment, The Pleasure of Passion, out soon. I, for one, am looking forward to knowing their history even better!

As for The Danger of Desire, as you can see, nothing much was happening for me to be glued to the story. It was fairly predictable in every aspect that I can think of. I didn’t much care for Warren, and Delia would seem like someone very smart, then would go and do something total TSTL, making me wanna facepalm. *sigh* 3 stars.