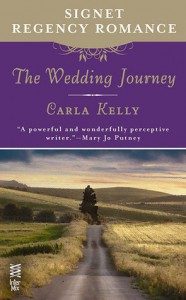 It’s always a little difficult for me to review a Carla Kelly book, mostly because I know I won’t be able to capture the life of her stories. So I can only hope that I make anyone reading my reviews intrigued enough to consider checking out that book. The Wedding Journey is one from her quite lengthy backlist (thank God for that, I hope she continues to write for years to come!) and a book that was equally heartwarming and heartwrenching. I just don’t know how to else to put it but this is what her books do to you. They make you feel every single emotion her characters are going thru!

Much like many of Ms. Kelly’s books, The Wedding Journey, is set around wartime. The Napoleonic Wars to be precise. The story begins in a camp somewhere in Spain where we find little Elinore, AKA Nell Mason, working around the Head Surgeon’s tent. Her parents were the dumbest people out there, or so everyone knew them to be. She had a younger brother whom she had to take care of most of the times, much like she had taken care of herself since she’s learned to walk and talk. Her father, Major Mason, was always in his cups and never had enough money to take care of his family. Not that he bothered. Her mother, Audrey, had suffered thru it all. She’s now a shell of a woman after years of trudging thru war-zones with her husband. She simply didn’t care anymore. But Nell, even at the age of 10, knew she had to take care of her family.

The Head Surgeon, Major Sheffield, had always been very affectionate towards Nell, like a daughter he never had. Needless to say he was always empathetic towards her plight. Hence, she would be given food in exchange of a little this or that done around the Surgeon’s tent. Sometimes she’d exchange blue beads from a necklace in order to exchange something she needed because she didn’t have the money; so thoughtful even then, winning the deepest love of the Surgeon himself and anyone else around him. She had the protection of the Surgeon and his new assistant, Captain Jesse Randall, and no one in and around the camp would’ve thought about harming her.

Jesse, 18 or 20 at that time, had fallen for Nell’s sweet yet loyal and honest nature. He felt protective when he had no idea what that feeling could mean. In the meantime though, duty called and Jesse was away to another station for 6 more years, not knowing what may have happened to Nell or her family. But when he returned, and joined the Marching Hospital Number 8 with Major Sheffield yet again his mentor, he wasn’t expecting to find Nell still working there. But she was as her family was with the army unit at that time. Only her brother was away with a relative, hoping to shine as the lone Mason with proper education. But Nell wasn’t unhappy. Her life has always revolved around war, bloodshed, soldiers and hospitals. She didn’t know any different.

In the time that Jesse was away, Nell has grown into a beautiful young lady with dark hair and blue eyes, and Jesse finds he can’t take his eyes off of her anymore. His protective instinct turns into a deeper love before he could do anything about it. Only he couldn’t tell her. Ever. Everyone knew he was the ‘shy guy’ among the soldiers. So shy that others poked fun at him. Even Nell would sometimes, but hers was always good-natured fun. Jesse thought he could never show his devotion to Nell and tell her what he feels... well, he didn’t think he much of a catch. He was tall enough, with a strong body and auburn hair, his Scottish ancestry showing. He worked pretty hard as a field surgeon too. Still he wasn’t sure he had enough to win Nell’s hand. What he never noticed is that Nell had a fascination for him too, only she was also burdened by the fact that she’s Major Mason’s daughter, and that meant no one will ever wanna marry her. Mason had no respect among his peers because of his gambling and drinking habit, being the worst father out there. He even owed money to several people, one of whom returns to bite in the a$$ soon enough, hoping to gain Nell as his mistress.

It was another Major called Bones. He was the worst in the unit in the sense that, because of his cold and cruel nature no one liked him but everyone feared him for certain. And Bones has had his dirty eyes on Nell for a while now.

It’s been 2yrs. since Jesse had been back, working alongside Nell among others. Major Sheffield still holds her in affection, so despite the same callous parents, she was doing pretty well. One day, suddenly, all that changes. Audrey passes away from a long suffering illness and Nell finds herself all alone; easy picking for Bones because her father will not be of any help on that regard. Then, one thing led to another and Nell finds herself married to Jesse Randall. It should’ve been a MOC where they’d simply march towards a border to escape the current situation from where they were stationed. Crossing that border, they should be safe and Jesse and Nell can have an annulment if they find they don’t wanna stay married. It should’ve been all fine and dandy, only fate had other plans for them. A journey of a lifetime where their love would blossom and flow in a way they couldn’t even have imagined a few weeks ago.

Needless today, Bones wasn’t happy about it and he exacts his revenge in his own nasty way. The Marching Hospital Number 8 was supposed to be moving away from that tiny Spanish village they’ve been situated in for months now. Bones was in charge of the moving, of which he takes advantage of. He leaves in the middle of the night, somehow making sure to abandon Jesse, Major Sheffield, Nell, another doctor Daniel O’Leary who was in support of the marriage, some patients too injured to move and 2 other rogue privates that no one cared much about. In the morning, when they found out Bones’s perfidy, there was nothing to be done. It was certain that if they are to manage, their little troop will have to walk the miles until they find some better way to ride to the border. They couldn’t stay for long, already overstaying their welcome with the Spanish. French were gaining miles and it wasn’t safe anymore to be around.

This journey, aptly titled The Wedding Journey for Jesse and Nell, would prove to be the most eye-opening, and most heart-rendering journey of their lives. A Journey where they’d meet people, see cruelty and disasters, losses no less painful than what they’d seen before. They’d also find kindness among the dead and dreary life after a war. Love will blossom, overflowing Nell and Jesse’s life. They had already adored each-other in their own sweet way but thrown together the way they were, it wouldn’t take long for them to get to know each-other so well even within those few weeks of trekking through the numerous Spanish villages.

Jesse’s expertise as a surgeon would come in handy too, where Nell would discover that along with his excellent skills, how mentally strong her husband was, yet how much he needed someone to hold him, comfort him at night. Her adoration will simply grow over time, while Jesse’s heart bursting with joy finally having Nell as his wife. At one point, any thought of annulment will disappear when they’d finally consummate their marriage. They wanted to be together, close to each-other and Nell was more than happy to comfort her husband after such grueling days of death and dread.

At one point, Nell’s happiness would turn wondrous knowing Jesse had loved her for a long time. And the fact that he’s not really someone making a day-to-day living. Apart from his generous earning as the field surgeon, where he’d amassed quite a fortune of his own, Jesse was from a very prosperous and upstanding Scottish family. Nell would learn that finally she’d have a home of her own (the way he’d ask her what she wanted was SO Sweet!); a home where she can finally settle down, maybe, God willing, someday have children. Her own family! There were doubts about Jesse’s intentions as to if he’d wanna settle down, doctoring a small town rather than something big but after their memorable (to say the least) journey together, Jesse had no doubt he wanted to settle down with Nell beside him. After all, both have witnessed how short life could be in the worst way imaginable. They were happy to be alive, together and have found love where they never expected they would. What else can they desire?

I didn’t think they could desire anything else, so happy I was for them! I wished there were more chapters where we could see Jesse and Nell’s life post war, blissfully happy in Scotland. I also missed if the few patients Jesse had to leave behind in Spain cause they weren’t up to a long journey like that, had made it or not. And if Daniel, who was in charge of them, was finally home with his own family. Jesse promised help once he crossed the border but his own journey was so fraught with danger that I don’t know if he ever did. Daniel and those patients were never again mentioned again in the story. :( I had hoped for a book for Daniel but I found none.

Either way, The Wedding Journey is such a heart-touching story that you must read to find out what I’m talking about. For those who may inquire, it’s a semi-clean romance (mention of a few kisses and love-scenes but no graphic details) but I loved it! I’d recommend if sex scenes isn’t a problem for you. 4 solid stars. I’m already checking Carla Kelly’s backlist to see what’s up next for me!