The Folly at Falconbridge Hall 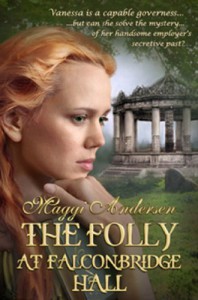 The Folly At Falconbridge Hall was yet another intriguing Maggi Andersen read that I had on my TBR for a long time. I’m so glad I finally read it because I really enjoyed the story.

Previously I read The Baron’s Wife, which is a standalone novel set in the very late 19th or early 20th century. The Folly At Falconbridge Hall is also a standalone (at least I think so), set around the same time, if a bit early in 1894. The storyline follows the same pattern, yet it’s not exactly the same. Whereas in the previous book, the h Laura arrives at the H’s mysterious castle that has been in the family for centuries after marrying him, here the h, Vanessa arrives at Falconbridge Hall as a governess.

The daughter of a good family, Vanessa had fallen on hard times when her parents passed away leaving her nearly destitute. Her father, the second son of a peer, had lost all contact with his own family after his marriage to Vanessa’s mother he fell out of favor with them. Vanessa’s mother was an active suffragist and influenced her daughter’s education and free thinking. Vanessa would’ve loved to be a part of it too, had her parents not passed away pretty close to one another, forcing her to seek an employment. To her surprise, Vanessa’s uncle, her father’s elder brother, came to visit her after her parents’ passing. Though that didn’t do much to make them any closer than before, he did help her getting this new job. Vanessa didn’t want to become a governess but with her credentials, that’s as close an honorable job she could’ve gotten. After all, she needs the financial stability. Her employer has a 10yrs. girl who needs a governess ASAP and Vanessa couldn’t wait to find out what’s in store for her in her new workplace.

The introduction to her attractive, widower employer did struck Vanessa in a way she’d never experienced before. Lord Falconbridge is tall and handsome, and a scientist to boots! Even though his expertise lay equally around the flora and fauna, he seems to be rather obsessed with the collection and study of butterflies (yep I looked up and found it’s called Lepidopterology). Vanessa is quite impressed by his obvious brilliance, though she didn’t like how the dead butterflies were pinned there for his perusal for all eternity. She found Lord Falconbridge’s intense scrutiny of her rather disconcerting as well, and hoped that she doesn’t have to pack up soon. Vanessa had no training or experience as a governess so she’d only be relying on her own knowledge of things. Would she be able to make him happy with what she has to offer to his daughter?

Her introduction to her charge, Blythe, was rather...lackluster. Vanessa has already heard that the previous governesses didn’t last long so she may have thought she’d find quite the challenge in her hands. However, Blythe seemed quite subdued for a girl of 10. In a few days though, Vanessa realized that the poor girl felt extremely insecure, when security and stability were things a child her age should never have to question. Not that Lord Falconbridge was a bad father, but exact opposite. For all his aloofness, he loved his daughter more than anything in the world. But he was often away for months on end to one long voyage or the other, traveling to various parts of the world in constant search for things to study. Blythe was old enough when her flighty, socialite mother Clara left them cause this life wasn’t exciting enough for her. Blythe was a burden she didn’t want and couldn’t have bothered with, as her marriage to Falconbridge AKA Julian was due to pure physical attraction. When it was all over, she simply left...then died in Paris in an accident, rumor has it she was traveling to meet her lover. Vanessa later comes to learn of it all from Julian.

Blythe remembered that day and felt her mother’s rejection to her core. The little girl in her still craved for mother’s love; a mother who never really loved her in the first place. Vanessa was sad and angry on behalf of her. She becomes determined to make Blythe realize that she’s not unwanted; that she’s loved by everyone around her. She wanted to see Blythe as happy as any other girl of her age. But first, Vanessa needs to make sure her position is confirmed. Lord Falconbridge seems to be amused by her discomfort when he’s intensely scrutinizing her, as if he’s trying to read  her mind. Vanessa didn’t know what to make of it, or how to react to her employer. She felt she was already attracted to him, which can’t be any good for someone in her position.

From Julian’s POV we find that he felt the same. But he knew that he can’t possibly flirt with the governess of his child, especially one that Blythe adores already. And why wouldn’t she? Julian could see that Miss Ashley was the one they’ve been missing so far. Moreover, he’s not the type to dally with the member of his staff. As far as I could garner, Julian wasn’t a womanizer by any stretch of the word. He simply had too much to do than skirt-chasing. But, after being burned by Clara, he was also very careful. Even though Miss Ashley intrigued him more than he cared to acknowledge, Julian knew he can’t let her too close to him. Even if he wanted to pursue anything, he’d have to be aloof, so this time at least his heart is safe from the same fate.

The mystery surrounding the sudden disappearance of the previous governess Miss Lillicrop had been swirling around Falconbridge for a while now. It seemed to Vanessa that Blythe, and maybe even Lord Falconbridge, liked the petite blonde a lot. But one day, she simply vanished, with her a valuable portrait that was in the Falconbridge family for years. The police couldn’t find any trace of her so everyone had come to the conclusion that she ran away with her trophy, and maybe a lover in toe as well. It was quite unbelievable seeing no one could picture Miss Lillicrop of stealing anything, but it was what it was. And even though the others kind of accepted for what it was, Vanessa couldn’t shake off the feeling that there was something wrong here. More so because there had been a suicide in the forest surrounding Falconbridge after Miss Lillicrop’s disappearance.  Despite how good Vanessa’s days were going, she couldn’t shake off the feeling of dread. Soon, Julian will also leave for another voyage to Amazon; another reason why everyone was on the edge. Everyone loved and respected Julian, so they didn’t want him gone, least of all Blythe who despised it and missed her father dearly. Because everytime he was gone, there was a fair chance he won’t return.

Vanessa had been aware of Julian’s voyage since the day she joined her new employment, and thought she could weather it out with Blythe. So, when one day Julian suddenly proposes marriage, she couldn’t believe her ears! Even though at first it seemed too hasty and, for Vanessa, something out of her most secret of desires, when Julian put forth Blythe’s well-being, it didn’t seem all that implausible. Julian had already decided that Vanessa was the right person for his daughter. He can trust her with Blythe’s care. That she won’t leave Blythe if anything happens to him. Blythe loved Vanessa, and even though he won’t voice it now, Julian was quite attracted to her as well. Time was short before he sets sail towards Amazon, and to the proverbial unknown, so a marriage was the best thing that he could think of at the moment. From this arrangement, Vanessa, who was quite lonely in life, will also have a family and financial security she was currently lacking.

Though it dampened Vanessa’s excitement a little that the whole business was a MOC for Julian, she had come deeply to care for Blythe, so she felt she could make this sacrifice. After all, she didn’t want to leave this place or the members of Falconbridge family either. Julian’s first proposal was a marriage in name only, which he changes promptly after her positive response. Well, I couldn’t blame him. I believe it’s been a long time for him, and with Vanessa around, how could he not enjoy that intimate togetherness before he’s gone, not knowing if he’d ever return? Vanessa was a bit disconcerted at first, but she wanted Julian too. And it all turned out to be great, especially when their short time together proved to be something she’d treasure in the coming months while Julian was away.

But that intense happiness was followed by a deep-seated apprehension. Vanessa was scared. She now understood how Blythe felt, because letting Julian go wasn’t going to be as easy as she’d initially thought. Back then, he was only her employer. Now he’s so much more to her than that. Vanessa tried her best to not think of anything negative, her only thought of taking care of Blythe and Falconbridge until her husband returned. She’s determined to make Julian as happy and proud as possible for she knew he needed it. But she also knew there was a chance he would never feel the same way about her. Could Vanessa live with such a knowledge? Only time would tell. But time was what they didn’t have at the moment.

The next chapters were full of interesting twists and turns that includes Julian’s travel to Amazon, that follows a sub-plot that I wasn’t expecting. These chapters revealed answers to questions that have plagued Julian and the people of Falconbridge for long. I did love how Julian and Vanessa’s relationship progressed despite all that had kept them apart for long, but I also wished they had more time together. The only thing bugged me was that the “villain” turned out to be the same person I had *sort of* guessed from the beginning. Put that way, I found the final revelation a bit predictable. I also wished there were more backstory to Miss Lillicrop’s sad fate, especially after reading the haunting prologue that only confuses you until you find your answers. Regardless, I really liked The Folly At Falconbridge Hall and was glued to the story until the end. 4 stars.