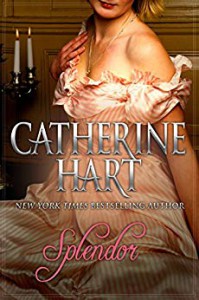 Good writing, but too silly characters (especially the h who went from a prudish spinster to a sexy siren the moment she met the H, her transformation was the most hilarious of all -_-) and situations made it difficult for me to take anything seriously in this book. In fact it started out quite intriguingly and I thought I'd found a new author I'll be checking out often. Unfortunately, it also went downhill soon. I only kept going to see how the author resolved a particular twist regarding the H. There was no big surprises there in the end either. Sigh.

Okay so I'm a sucker for punishment so here are a few "examples" of what I meant by utterly silly/ridiculous/mind-bogglingly weird, just boiling within me and I couldn't contain it any longer (don't ask -_-):

1. The heroine, Eden. A prudish spinster who can't see anything without her glasses. Lives with her widowed mom and trying to salvage her father's almost done-for warehouse business. They live in a seaside town and Eden's main customer are sailors and, uh, sometimes an odd pirate or two masquerading gentleman sailors. That's how she met the hero, Devlin Kane AKA Devil Kane, The Pirate Extraordinaire. She was so prudish she couldn't even look at his eyes for long (though that didn't stop her from checking out his manly attributes). The moment it was official that they may become an item, she became this siren; a transformation that was totally unbelievable. Whereas I thought her basically a harmless doormat, she proved she's one step ahead of that. She also became this irrational, TSTL thing that............... you just have to read the book cause I can go and on and on about her idiotic behavior.

2. The hero, Devil, was struck by St. Elmo's Fire/lightning while on a voyage and, uh, disappeared instead of dying instantly. That's actually in the blurb I think so not much of a spoiler; the reason why I decided to read the book in the first place. If not then here you have it. :D He was alive but no one could see him... except for, yep you know it! Eden!! And by touching her he could be visible. That's how actually he had to also be around and with her so he could be visible enough to do his business in her town. Of course he gradually begin taking interest in her too..... and the rest, they say, is.............. (not gonna say it). If too much going at it like the bunnies helped achieved nothing, he got his really manly form back to the world of visibility. ;) Oh, and also true love. Can't forget that bit. LOL

3. Initially, I found their banters funny even if a bit too contemporary sounding instead of 1718-ish, when the story is set. Even if Devlin was more of an oaf which was okay seeing he was an uneducated pirate captain. I was even okay with his overall oafishness and randy thoughts and behavior. I thought Eden will be his salvation and tame his hide. But no suck luck. :( It's like he rubbed off on her in a totally wrong way and she also became what I described above. Sigh.

4. Eden's mom. When we first met her she was grieving her husband's passing. An almost blind, old lady who had grey hair. Then she met Devil's first mate Nate (not sure if he was younger than her or not) and the rest they say is............... she was having his child by the end of the story so go figure. As if them and Devlin-Eden both couples staying at the same house and doing "the deed" (which the author thought was funny to mention as often as she could) wasn't gross enough. Yikes. I was never comfortable with this bit of the story at all.

5. There was this Hawk Devlin had, who was his constant companion... and Eden also had this parrot. They were also living in the same house. And became a 'couple'.