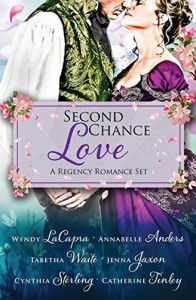 My reviews are honest & they contain spoilers. For more, visit:

3.5 stars. This rating and review is ONLY for “Mrs. Sartin’s Secretary” by Wendy LaCapra. If I read the other stories later, I’ll try to review them. Of course, the rating may change too.
****

When I read book 1 of Wendy LaCapra’s Lords of Chance series titled Scandal in Spades last year, I was blown away not only by Wendy’s beautiful writing but also the story and its protagonists. The H and h shared amazing chemistry that was palpable right from the moment they met. It was a straight winner so I was eagerly waiting for book 2...which turned out to be Heart’s Desire.

While I waited, I heard about Wendy writing a short story in between these two books, somehow connecting to book 2 through its hero, Lord Markham or Heart. But why is Markham called ‘Heart’? I talked about it a bit more elaborately in my review of book 1. In a nutshell, the other heroes of this series formed a group of sort where Markham joins later, and they called each other by sobriquets taken from the cards. The hero of book 1, the Marquess of Bromton Giles went by as Spades. Two of his close friends that will have the next books in the series, Lord Farring and Lord Rayne, are known as Club and Diamond. In that order.

In book 1 I had the hint that Markham, the youngest of them all, was a bit of a rake, hence he was the Hearts. It was said that he never left his lovers wanting. Just how much of a rake, you get a glimpse of it in this really short story here. From the beginning though, I had issues. I had a difficult time connecting this story with the series. For one, Mrs. Sartin or her secretary, the two protagonists were never even introduced in book 1 so I had no earthly idea who they were and why they even had a story to begin with?! Well apart from the fact that it becomes clear very early on that Mrs. Sartin is Markham’s lover. (note here that Mrs. Sartin may well have been briefly introduced in book 1 but I don’t remember her at all so my point stands)

In the end though, Wendy’s note explains that we’ll be seeing more of Mrs. Sartin in Markham’s book, Heart’s Desire. She wanted the lonely widow to have a story so she gave her one.

Still, I couldn’t really connect with either Mrs. Sartin AKA Amelia or her secretary, Matthew Bellamy. It’s a novella so the story has the feeling of being rushed to the ending because you don’t get much of their background. Even with how many times it’s told that they’ve known each-other for a long time, as a reader they were totally new characters to me.

When the novella opens up, we find Mrs. Sartin, the widow of a wealthy tradesman, is on the hunt for Markham, her on and off lover, with a friend called Lady Constance. She wanted Markham to ‘distract’ her again because her life was going through some big changes that she knew was coming for a while now. Well, I don’t know if Amelia was an adventurous woman to begin with or the company she kept rubbed off on her (Constance and a few others from her group are certainly what you call ‘fast’ widows of the Ton) but Markham came highly recommended by them all.

Anyway, long story short, Markham, by then, was in a bit of a pickle with Lady Clarissa, Rayne’s sister, that you get a hint of from book 1. He was distracted by her so he had no interest in the wealthy widow any longer. The poor Mrs. Sartin gets… uh, rejected, when she finally has the chance to proposition him at a ball.

Matthew Bellamy was also attending the same ball with his peer of the realm mother Lady Dorothy—in search of a suitable wife—also on his mother’s insistence. It’s there Amelia, after her rejection from Markham, has an epiphany. That’s because when Constance finally eyes Matthew and finds him to be a fine specimen that she wanted to, er, have a taste of, Amelia’s mind was literally like, OMG how is it that I never noticed how hot my secretary is? Someone who has been with my husband and me, working with us day and night for the past 10 yrs?? With whom I’ve spend many a night discussing business??? How is it that I never noticed how manly he was????? How is it I missed that he’s grown up from the lanky teenager who came to us to this able bodied young man??????! O_O

From there, Amelia figures she doesn’t like how Constance is eying something that could’ve been her plaything (their discussion about their lovers gave me this feeling, since they obviously liked sharing their…uh, toys… oops. :P). So she distracts her friend and begins pondering if Matthew could, indeed, be her toy since she couldn’t engage Markham to do the job.

Matthew on the other hand wasn’t happy to see Amelia flirting with Markham, though he knew he could do nothing cause she was free to pursue and sleep with whoever she wanted to. He had no right. Not yet at least...But Matthew had some plans of his own, though he didn’t know whether he could do anything about it. Or if he could ever convince Amelia of his own feelings for her. It was pretty apparent from their monologues that there never was any attraction or chemistry working between them. Definitely not from Amelia, though Matthew had wanted her from afar.

Have to mention here that this is an older woman/younger man theme, a theme I generally love. Sadly, Matthew and Amelia shared zero chemistry and their moments together were super awkward. Matthew also had another ‘secret’ and I often wondered if, because of that, it was more of an infatuation with the first beautiful older woman he’d been around quite closely for the better part of his life and so he put her on a pedestal and wanted to worship her, rather than love. For Amelia, her sudden realization that she loved Matthew was not convincing. At least not to me.

I hope I don’t come off as nitpicking and I did think the story was sweet in parts but I needed more as a reader to see how these two clicked. I just begin reading Heart’s Desire so I’m hoping to see how Amelia fits into the story. Maybe I’ll see more of her and Matthew there to get an idea of their previous relationship (before they became lovers) to make sense of their own story. For now, 3.5 stars for “Mrs. Sartin’s Secretary”.

Review copy received from the author, thanks Wendy.