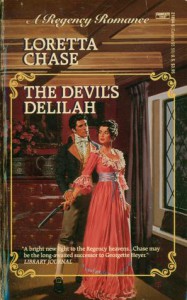 Delilah's father 'Devil' Desmond, the notorious libertine, just wrote his memoir and gives it to the scholarly Jack for editing. Jack is just his polar opposite, books are his world. Delilah is her father's daughter, at least in her spirit. They're attracted to each-other when a rakehell (he was awful, I mean leaving bastards here and there awful) Berne comes in the story. But he was titled! You'll read what I felt about that in my comments following this paragraph. I though Delilah was a TSTL and Jack deserved a better heroine since I liked him. He was brilliant and a good guy. He was Max's, (the hero of the 1st book) friend.


It is slow IMO. The pair is giving me mixed feelings :/ I mean I started to like Delilah, then she feels happy cause a pooh-pooh like Berne wrote a moronic letter saying he misses her (when she knows about his scintillating character) and I'm like whattttt...! Grrrr I just want Jack to stand up a bit more! I'd like to kick Berne up his arse and throw the shoes away as well! He's just ... arghhh!! :@ [read: the species I dislike a.k.a rake! Berne was one yukky guy]
***************

Grrr, Delilah and Berne do deserve one another! Poor Jack definitely deserves better. I thought Delilah will show some brain but ultimately she disappointed me. When someone repeatedly trusts (and she doesn't even love him!) someone like Berne (a SOB in all possible angles; I mean I really really hated him, I don't care whose fault was it!), I'm bound to question her sanity! Really, Jack maybe wasn't one of those alpha males but he was good. And, the book IMO had much better prospects but just didn't amount to it. I'll give it a 3 star only for Jack and the fact I like Ms. Chase's writing style, otherwise it would be 2. :/
Tweet