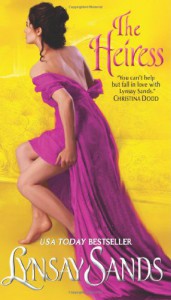 Only read about 2 chps and I'm kinda skipping. This book is like JQ's Wyndham series, two incidents occuring simultaneously. At first I thought it'd tell us about what happens after Richard and Christiana's book but nope. I rated JQ's one 3 stars since the style didn't work for me. Here, I'm not sure either. Lots of repetition, from Suzette, Lisa and Daniel's point of view. So, I'm skipping the parts I do not wanna read again, mainly the happenings during and after Geroge's death. Don't know how far I have to skip to get to some interesting point! :/
**********

Well, still in the book. Have to say there are some scenes I've immensely enjoyed so far, they're so damned funny! I mean this is what LS is all about, unbelievable/odd scenes that make your mouth hang, yet you can't help but like them and yes, laugh like crazy! Scenes that mention 'happy little grunts', 'maypole', 'bobbing backside' ... Lord, you have to read to get to the bottom of it. :D

Now back to the story, it's ok. I'm now on the 7th chapter. Daniel and Suzette are good, better than Richard and Christiana IMO. I really wanna read Richard and Lisa's story, have to say they didn't have much floor among the whirlwind of "Dead or Alive: A Dicky Mystery" ... I've skipped a few paragraphs here and there, wasn't interested in old details but now it's getting quite interesting ... Let's see what happens next.
***********

It has become really interesting after chp 10 ... Crazy actually, things have taken quite a different turn. I have some hunch to what might've been happening to Suzette and Daniel. Seems like there's someone does not want them to get married. Poor Suzette! That supposed letter from Daniel made me sad, it was rude and ... just plain awful. She's heartbroken now. On the other hand, Daniel has been shot ... Hmmmph!
***********

That hunch wasn't much of a hunch since it was quite obvious what was happening there. Still, I liked it. Rating it 3.5 since I didn't want to read half of the book twice over. But, the new chapters were quite good and as I said earlier, there were funny scenes all over it. I enjoyed it quite a bit but still, not the best by LS.

Still, looking forward to Lisa-Robert's story. Only hope there won't be any more of "Dead or Alive: A Dicky Mystery" in that one. :",true"
Tweet