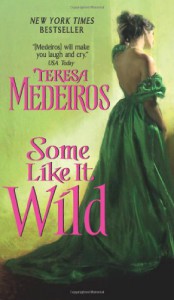 
Absolutely adored the hero Connor, such a hunk of a man and sweet, too. *sigh*


Seriously, I like Connor and I kinda like Pamela as I like all the heroines with brown hair/eyes and a curvy body, who isn't the 'belle of the ball' type. I wish she was smarter since she isn't entirely dumb. So, why on earth she's concocted such a moronic and risky plan??? And, also Connor's playing along with her. Sometimes, I don't know what to think.

1st of all that dumb plan of abducting a highwayman all by herself and her whiny sister, ahemm ... I thought she's gonna get away with it but thankfully, nothing out of the ordinary happened. They were trapped by Connor and his men. Seriously, she thought that a highwayman would just let her abduct him without doing anything? She even asked for a place for shelter of him. C'mon you're 'abducting' him, where do you think he'll lead you to? ... I can go on and on and on about such stuff. Set my eyes rolling in every few pages, so damn stupid! But, whatever else I read about Pamela tells me she is an even minded, very responsible good girl despite the fact that her mom was an actress and a part time whore, a very self-centered individual. I shudder to think what the little girl had to do when her mother was set upon a 'mood after one of her lovers disappeared'. These kinda women should never have kids because the little girl had to look after the baby sister as well. So, I do have a lot of affection for her. Only if, she wasn't set upon to deceive this Duke who'd been looking for his heir who went missing along with his wife (can't blame her, he was a pathetic SOB, I wholeheartedly agree with Pamela on how to handle such a pathetic case!).

Apparently, Pamela suspects her mother was murdered in the theater fire (yes, after the woman died, it's found that she'd left the girls with only but a scrap of paper aka the 'letter' to live with!) and she's set upon to bring the murderer(s) to justice, with Connor's help (and life) if necessary. She needs the money as well as the justice and Connor gets the privileged life (and women) he always craved for. I know but it's not gibberish guys.

Well, to go back to the story, Connor is a sweet guy. He is tall, big, good looking (with a dimple and a cleft on the chin), possessive and very protective for a highwayman. There is a line where it's said that he hungers for a soft touch in a woman since he always had to pay for his pleasures ... It really gripped me. He's not Simon and I love that. He's already forcing Pamela to stay by making her his 'fiancee'. lmao I love this guy.

There are some definite funny moments as common to any TM novels and my fav, bawdy ditties (there's one in "Some Like It Wicked" too and loved it)! I love TM's bawdy ditties, they make me roll on the floor with laughter. :D

Brodie is a funny character. I just wish the plot was different and can only hope it gets better.
************

Think I like this one so much better than the 1st book. I really really like Connor, I can keep on saying it. I have no objections about Pamela as well. Think I have some hunch to who did what and why. Just waiting to see how all these sort out in the end. Love scenes were sweet. There's something between Pamela and Connor you just cannot deny unlike Catriona and Simon.

Well, I loved it. I really did. Just because of Connor. He gave me this feeling of happiness, can't explain it. Maybe I was just in the mood but he was really adorable. There was another twist (the other I already figured out). It should've been obvious but didn't see it coming. I was too absorbed in Connor I guess! Ok, enough whining. A 4.5, because I liked the characters a lot (ohhh Connor!! *cough cough*) and the plot twist that kinda had me there.

I think we'll have another book for Sophie and Crispin, if the the epilogue's any indication. I didn't think they'd get a book since in Fairleigh Sisters series, Laura and Lottie's brother George didn't. I'd welcome that book because, though I don't know what to expect from Sophie and Crispin (none impressed me much), I'd love to read more about Connor. :p lmaooo
Tweet