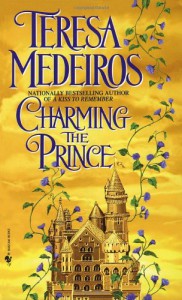 Had to do a lot of maths in this one, you'll know why if you read the book and my review! :p


Really, this one's such an odd book! The hero has 12 bratlings which includes children from his 2 marriages and 5 bastards (2 infant arriving just days apart) and he's only 32! *imagine me all goggle-eyes* He's rumored to be so potent that just looking at his eyes can make girls pregnant *gasps* ... Moreover, he can't even remember his kids' names ahemm ... Such a turn off!!

Oh Poor Willow, I feel for you! I wouldn't want Bannor if he begged me for it ... The girl had a nightmarish childhood, with a greedy stepmother and her own brood of 10 kids (6 from the earlier marriage, 4 with her father ... I hate maths ... my head's already spinning!) ... All of her step siblings are just what I'd call hell on earth. And I have no idea how she endured it all. Then she thought this guy is going to be her Prince Charming and save her but upon arriving in his castle all her hopes were dashed. I didn't find her ordeal funny. Don't get me wrong, I adore kids ... But this is just plain annoying. Hmmph!

Really some moments are truly funny. Now they've laid a siege on their father's (Bannor's) castle with Willow as their champion. So unrealistic but, hey, the series is called fairly tales right? :p I do wanna find out what happens next now that Bannor is trying hard to seduce Willow, expert strategist that he is! ;)
**************

How many of that brood of 13 (yes, one more has arrived) are Bannor's own? I'm no good at maths but I think it's 7 from his two previous marriages. I'm obsessed about finding out! Ahem ... I know now that the bastards aren't his. There was this revelation and I believe I can't help but love him. He's so sweet! Why I said that, isn't only because of that revelation but also for some other things he said to Willow; things about his childhood, previous marriages and why he did things because he 'promised' to someone.

Willow's efforts are adorable. I thought her kinda immature by taking the kids' side and act like them but now she made me change my mind. I loved the love scene and she's already in love with Bannor. Now, he's planning to marry Willow again in front of the whole village with a big feast and wanna show her pathetic family that she deserves much much better. Seriously, you gotta love a man like that! ;)

The scenes with Desmond and Bea are also very cute to read. I know I won't see anything more *sigh* but there is something developing between them. :)
*************

Hmm finished it. Sweet. I didn't quite get Willow's stepbrother's obsession for her ... Really, why? :s There was nothing to point out, just that he was obsessed and well, became the villain in the end ... 4 stars just because it was sweet and funny. And, oh, the epilogue, welcome to the child #14 (in whole), #8 for Bannor and 1st for Willow (hope I'm counting correctly) ... phew! :p
Tweet