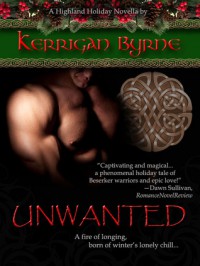 Just finished [b:Unwanted|16092712|Unwanted|Kerrigan Byrne|http://d.gr-assets.com/books/1351260465s/16092712.jpg|21897858] and I’m already going on a withdrawal of sexy Highlander Berserkers! Book 3 of Highland Historical was excellent in one word. It had everything, even as a novella; love, passion, loyalty and a thrilling story with three sexy berserkers that got me hooked till the end. Yet again, Kerrigan delivers!

I was wondering at the end of book 2 that whose story it’ll be. There weren’t really any indicator. So as we meet Finn, a Norseman and a berserker from the temple of Freya, I was immediately confused. Finn is big, strong, a man of very little words which initially makes him look like a cold individual. But as I read on his upbringing, I understood why. Finn’s also a bastard. He has no place in the temple where he has spent almost all his life since his mother abandoned him very young. He only knew that his father discarded his mother after he was born. The bastard even named him before it. His life in the temple just made me sad. My heart went out for that little boy who never knew love or kinship since he had no banner, neither a surname/clan name. Now, he’s on a mission to find the two Gael berserkers with tainted bloodline and wipe them off the face of the earth; all because he was made to believe by the Elder, Magnum that this is Freya’s wish. Finn will do that, just for an identity and a little acceptance.

As Finn gets closer to the MacLauchlan lands, his sensitive hearing picks up a baby’s cry in the middle of a violent snowstorm. He finds the baby, abandoned and going blue. I was laughing, reading Finn’s reaction to this screeching little bundle, since he’s never really held or known a baby in his life. Upon arriving at Strathlauchlan, he’s seeks out help from the tavern and is led to a stable........ part stable, part shabby dwelling of our heroine, Rhona. Oh, poor honey. She’s poor and has nothing. She’s the nursemaid and from time to time looks after newborns and such but when her necessity is over, she’s back to square one; to nothing. Rhona’s life story is nothing like the other two heroines we’ve read so far. She’s been in a short, loveless marriage until her husband died. The story afterward is excruciatingly painful. She has been raped by some soldiers who offered her help to get to her mother after becoming a widow. Then she had a baby, but couldn’t get a job anywhere because people knew of her condition and probable reason behind it. I felt so sad for her, can’t explain. So far, Rhona has been a brave little thing. A survivor. But even survivors have their limits. Right now, Rhona has almost no means to go on in this bitter winter, unless she’s given the job of taking care of one of the Mistresses of the Laird’s keep. Apparently, Evelyn is pregnant and Rhona is summoned by her. As Rhona is thinking about all her misfortunes, someone knocks at her door and she hears the crying of a baby. When she opens the door, there is this huge man, holding a screeching baby, asking her to make it stop!

(don’t ask, I was still laughing at Finn’s wording where babies are concerned. lol)

Finn, who’s not yet mated and doesn’t even dream of it (reasons were revealed later) is instantly attracted to Rhona. This goes beyond simple lust as he finds out soon enough. Their interactions afterwards and watching Rhona nurse the baby doesn’t help the matter. Finn wants her, and he wants her now. Then, even though Fin doesn’t say much about himself, Rhona ends up confiding in him about the unfairness and cruelties that life bestowed on her. Finn is enraged on her behalf but he’s still in control, though barely. This thing turns to that and after an incident with a drunken woodcutter who wanted more than Rhona could give him, Finn strikes a bargain with Rhona.

Now, Rhona is attracted to Finn. I mean who won’t be, he’s the epitome of Godly beauty and perfection; big, hard body with white blonde hair and gorgeous green eyes. And Rhona can’t believe what she’s hearing, that this man wants her. She’s not happy with the bargain (and what this bargain actually looks like), but she’s helpless. Their night of passion is a revelation of the deepest kind to both. Finn knows that something has changed within him irrevocably. And Rhona, for the first time in her life, realizes that lovemaking doesn’t have to be a shameful, miserable experience.

I also loved their interaction where the baby was concerned and the naming process of Iain (a lovely name!). But Rhona still doesn’t know why Finn is really here, and what business he has with the MacLauchlans. She’s vulnerable, and a little hurt that Finn will leave her soon. I felt for her. Rhona has never known an ounce of security and love in her life, and so, after one night of something so elusive made her think of the unthinkable. Yet, Finn doesn’t leave. Moreover, he’s determined to accompany her to the Laird’s keep. One look at Rhona’s hole-riddled footwear and Finn is carrying her, again, in his arms to the keep.

The main revelation came when they’re in the keep and the brothers sense another berserker in the castle. Whoa, they fight like mad beasts, until Roderick notices the resemblance and then, so does Connor. It took me totally by surprise. Finn can’t believe what he’s hearing either, until he sees the picture of the previous Laird. It’s confirmed in a few that Finn, is indeed, a Maclaughlan.

We also get to see Lindsay and a very pregnant Evelyn and some funny, heartwarming banter between the SILs. I believe, Evelyn already knew who Finn is and who Rhona will be to their family in the future, so she warmly welcomes Rhona. Not that Lindsay didn’t but I just had the feeling coming from Evelyn because of her special ability. It made me sooo happy to see the two big brutes doting of their wives *sigh*.

But the best thing was yet to come, and it was one of the hottest and most intense scene I’ve read in a while; where Finn finally decides that it’s no use to fight his attraction and longing for Rhona and claim her as his mate. WOW but I can’t explain in words. It was just........ it was....... *gets distracted while remembering that scene... sigh*

The climax and the ending were heartbreaking and then, beautiful. Again, I ended up wishing for a few more chapters. Already mentioned that I’m going through an withdrawal. *pouts* Peeps, just pick this series up. It was worth it. I’ve enjoyed [b:Unwanted|16092712|Unwanted|Kerrigan Byrne|http://d.gr-assets.com/books/1351260465s/16092712.jpg|21897858] and the whole series so much that I’m thinking of stalking Kerrigan for the next installment (if any... I sure hope so!). 4.5 stars, gladly!
Tweet