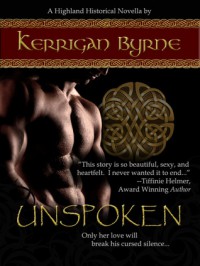 Oh WOW, I must say I’m very impressed by this novella. Highland Historical is a debut series by Kerrigan Byrne (if I’m not wrong) and [b:Unspoken|13584009|Unspoken (Highland Historical, #1)|Kerrigan Byrne|http://d.gr-assets.com/books/1334199471s/13584009.jpg|19170915] is the first book of it. I was looking for something different to read and berserkers being one of my favorite paranormal beings, I jumped when I heard about this series. Overall, I felt the storyline was pretty compact and yes, Kerrigan’s writing was excellent. The hero, Roderick was just adorable. *sigh*

The whole series is set in the medieval Scotland. This one starts out on the verge of a bloody war, in fact just the day before it. Evelyn is originally an English who has her own secrets to hide. An orphan, Evelyn never had a lot of security to speak of. Later, she ran to Scotland from people who wanted to misuse her special ability. Evelyn has visions and sights and she has been ill-used by some in the past because of it. We don’t know much of her background but a few bits and pieces of what her life was like. Evelyn works as a maid in a shabby tavern in Scotland for a minimum wage and a place to sleep. Her life is still pretty tough but at least no one knows about her secret here. Yet she’s always terrified that someone will, someday.

Evelyn just had a vision, a terrible one where she found herself in the aftermath of a battle and looking for someone frantically. When she wakes, shivering, she has no idea what that means. Soon, in the evening, everything sort of begins falling in place. Men gathered in the tavern, most of them are warriors, spending a night drinking (among other things) to ready themselves for the battle next day. In the midst of serving, Evelyn becomes aware of a new arrival and others whispering about him. She finds herself looking at this huge man, cloaked (literally) in darkness, as if darkness perpetually follows him. She hears the bits of whispers swirling around her; something about the berserkers and one of the fiercest named Roderick Maclaughlan, who is now occupying a shadowy corner of the tavern. She also learns that Roderick is mute.

These people, they don’t like him and yet to win the battle, he’s been hired. They also think his powers are dark and fear him thus. But either way, they’re very curious about this man.

Serving Roderick his food falls on Evelyn’s hands. She’s sort of forced by the other tavern maids to do it. They, apparently, don’t like her for being an English. So, let her bear the brunt of the devil’s anger/dark powers. As she shakily goes to serve him, Evelyn finds herself looking at a ruggedly beautiful face and a pair of otherworldly green eyes instead of something ugly, evil and vicious. Evelyn is a goner that moment. This scene was super where she tries to communicate with him, blabbering away and then berating herself for doing so, knowing he can’t communicate. And instead of finding anger, she finds amusement in those eyes. Evelyn doesn’t understand why people are afraid of him.

Then the story picks up when Evelyn is targeted by the betrayer of the lot since she blurts out to him about his betrayal, which she learned through her vision. Roderick saves her twice from that man. Evelyn falls into his arms, even if for one night because she already knows that Roderick will die in the battle next day.

To know what really happens, grab the book now! I have to say I was glued to it from the very first page. The story was not only compact but intriguing as well. Kerrigan wove the tale in such a way that she made me believe in Evelyn and Roderick’s chemistry. Their connection was done so well that even though characters sleeping with each-other too soon kill some fun for me generally, I was very happy for these two. I also find the trend of berserkers mating for life really sexy. The only complain, I wanted MORE of the story. Definitely more of Evelyn’s background. We learn bits of Roderick’s, that he’s a prosperous baron, though his older brother Connor is the laird. I also wanted to know how exactly these Highlanders came to be awarded with this gift from Freya.