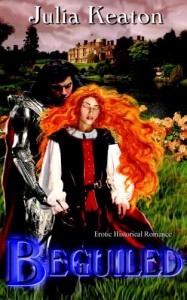 
Hmmm, kinda confused about what to write. I was so totally enjoying the book but at about halfway through, I lost it. There were things I just couldn’t take in, couldn’t AT ALL believe that Alexandra or ‘Alex’ and Bronson had anything like ‘love’ blossoming between them. Plot was so so; I had questions like how come for so many weeks, people couldn’t identify her as a girl, regardless of the fact that she lacks womanly curves? Was she that good in her disguise? Didn’t she have problems with the bindings and wigs, wearing them for such a long time, 24/7? But I was willing to overlook it all, had it not for how creepy Bronson turned out to be and Alex letting him act as one. How was it love, I don’t know.

The narrative wasn’t flowing at first but soon, I got into the story. Alex was traveling in disguise of a man, running away from King Henry VIII’s court to evade an arranged marriage. Not much of it is narrated throughout the story, just that she was standing somewhere between the border of England and Scotland and thinking how to get to her mother side of the clan McPhersons, when suddenly she heard a womanly cry. She, at first, thought it was a lover’s quarrel but soon realizes the woman was being robbed. She ‘saves’ her from robbery. The woman, or at closer inspection, the girl Constance starts ‘hero worshipping’ Alex. Constance was some chit, very impetuous and totally air headed. She forces Alex to take her to her father’s castle. Upon their arrival, an annoyed Alex finds out that the girl not only had the father waiting but also, 3 brutes as elder brothers- Bronson, Raphael and Gray. There’s also another brother, Nigel, who loves courtly life and lives there. The Blackmores, most of them welcome them as Constance prattles away about Alex’s ‘bravery’. The eldest, Bronson, takes a dislike to her on spot. On their coaxing, Alex accepts their invitation to stay the night.

Now, I thought this is gonna be some fun and wanted to see how things are revealed. It WAS fun, for 1st half of the book. Some scenes were really funny, the way Alex had to evade the brothers and keep her disguise. They all thought her a ‘pretty page boy’ type, a green boy no doubt. And, Constance kept on smothering her with her attentions. Days pass by but she can’t escape. Bronson, on the other hand, thinks the boy is working his way to snare Constance and her dowry. So, he keeps an eye on him. He and his brothers even take her to a raid with the disgusting McPhersons. I was laughing hard, seeing how the brothers were trying to make a ‘man’ out of her. Alex meets one of the clan members, who recognizes her as she looked a lot like her mother. She was already a bit hesitant, hearing all sorts of negative stuffs about her clan. Anyway, she was so stinky from the raid that she had to take a full bath, which she couldn’t, being afraid that she’d be revealed with the knowledge that these people have no love for her clan. So she goes outta window to bathe in the nearest stream. Bronson follows her and sees her in all her glory. He’s suddenly in lust, I mean barbaric lust.

After that, there were more funny scenes as Bronson, even though he’s betrothed himself, can’t but think of Alex. He takes it upon himself to torment her, by continuing ‘making a man outta her’ activities. He wakes her up at dawn (Alex sleeps in full clothes) to train with his men. I really liked these scenes; I thought they’d conquer each-other with their mutual desire and then, love. Also, there is a scene where he summons Alex in her room while he was bathing and asks her to help. But, the fun escalated as Bronson couldn’t, just couldn’t keep his hands off her, kissing Alex in her guise more than once and was caught by his brothers who became concerned. Both Gray and Raphael take it upon themselves to make a ‘real’ man out of Alex and take her to an inn.

In the meantime, the McPhersons are discussing a plan to save Alex from the odious Blackmores. Alex’s uncle Hugh is the clan chieftain, to whom her other uncle Argyle informed about her. Hugh’s daughter Kiara comes up with a plan to investigate Blackmore castle disguised as maids, for that she’ll be taking one of her brothers, Wren. Anyway, they do that and Kiara sees Alex in Bronson’s room while she took the linens inside. She is sure Alex is their kin and reports back to her family. There was some history between Kiara and Gray that, sadly, was never really explored, only mentioned a few times. I would’ve love to know more about it.

When Raphael and Gray takes Alex to that inn, hearing the news Bronson rushes there. He already had some suspicions of her being a McPherson since they sent him messages to give Alex back. Yet, he wants her for himself. I wasn’t AT ALL ready for what happened next. Gray selects one of the barmaids to ‘help’ Alex become a man. She was afraid and feeling faint. Then Bronson comes to her rescue. To tell you the truth, I really enjoyed their kisses so far, the way those were described. But, this ... NO NO NO! The whole incident (another one later on) wasn’t just my cuppa tea and considering the situation, felt downright disturbing. I found Bronson creepy, wasn’t sure how Alex could stand him afterwards! And I was thinking somewhere between 3.75 to 4 before but after this, not even 1!

Anyway, some of the sex scenes were hot but I couldn’t help thinking that Bronson was forcing himself on her, even though Alex seems to like it. Also, from Bronson’s musing, it was apparent he felt guilt but since she was a McPherson and thus, an enemy so it was justified. The Creep! When Alex hears Bronson is betrothed, she tries to run away but Bronson catches her and again, lust rears it’s head (yah, you got it, his ‘manroot’... don’t even ask) and he was almost about to ravish her, again, in the middle of a field. At that moment, the MacPhersons come and take Alex. She goes with them, bargaining that they let Bronson live. *exasperated sigh* But when she meets her extended family, she is very happy. Bronson’s vanity and male ego are tickled hard by this so he takes his brothers (by now everyone knows Alex is a girl) and slips into the McPherson castle in the middle of the night. When he was, again, about to ravish a sleeping Alex, Kiara caught them together. They are escorted out. Alex, then, decides to go back to England and marry the man the King selected. Bronson’s father also reminds him of his duty to marry his betrothed. Bronson gets drunk but two weeks later, Gray and Raphael kinda haul him outta his stupor and later take him to the McPhersons to meet Alex one last time...

I really loved Stranger in my Bed and thank god I read that book before this one. If not, I don’t think I would’ve given Stranger in my Bed a thought. I didn’t really wanna do a review of Beguiled but did it anyway. After much thought, I give it a 3 stars; because of the 1st half, which was truly enjoyable IMO.

Warning: Not for the people who do not find ‘backdoor lovin’ sexy.
Tweet