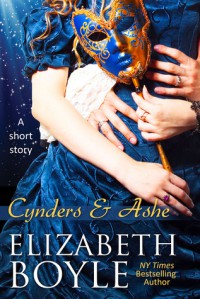 I’ve been meaning to read Elizabeth Boyle’s book for sometimes now, so this novella seemed perfect to give her writing a try. I did like her writing but the storyline was pretty predictable with the Cinderella vibe all over it, and kinda bored me. TBH, it could’ve been a sweet story had it not been so predictable.

Ella is an orphan and worked as the companion of a young miss when she made an impetuous decision. Well, a serious of impetuous decision I guess. Her charge ran off with someone whom her parents forbade her to marry and so, Ella, who already like to dabble in sewing and clothing, masqueraded as her. In the annual Ashe Ball, given by Viscount Ashe has a legend, where the Ashes find their brides and it’s always love at first sight. Her employer being nearsighted, Ella escapes being noticed by her but the young viscount Ashe, or Julian does take notice of her. They start flirting and then dance. Julian is already feeling the vibe of the legend and thinks this is The One for him. He asks her to meet him later. Ella knows she’d be in a pickle when this whole thing goes out. They kiss and all, then she meets this elderly lady who used to know her parents, in the ball. The woman is sympathetic about her stupidity but asks her to ‘enjoy’ the night before she has to leave her job and join her (the lady) as her companion and sail away from London the next day. Ella ‘enjoys’ herself alright, giving her virginity to Julian in the process. I don’t know if Julian was really in love as it was depicted but when he finds Ella virgin, he’s very surprised, which kind of made me think he was just looking for some sports under the guise of all these hullaballoo. But it was just my thought. Anyway, he asks her to meet him again when the masks are off so that he can announce their engagement. But, of course, her guise was off as her employer somehow notices she’s not her daughter and she drags Ella out of the Ashe house. Julian, it seems, was stunned to do anything for he. *rolls eyes* Either way, Ella would’ve ran since she couldn’t tell Julian her true identity.

Anyway, 5 years have passed. Ella returned to London from wherever she was with her parents’ friend and now working as a seamstress at one of the best milliners here. Fate kind of plays a part again when she gets another chance to enter herself in the annual Ashe ball, which will take place tonight. She has just the dress, the same type she wore so many years ago. She created the dress for someone else but the woman who ordered it for her daughter, disapproved of it. Ella gets some help from her seamstress co-workers in this regard. On the other hand, poor Julian has been waiting to find his lady for all these years. He tried to track her but didn’t go very far. Today is the last Ashe ball for him and he’d HAVE to choose a bride tonight (no idea why though)— a fact Ella, like many others, knew.

You can guess that what might’ve happened at the ball. Yes, Ella and Julian met of course but, the woman who ordered the gown recognized and Ella ran again from Julian. Don’t worry, it ends soon enough and doesn’t drag it much more. Honestly, I thought it was great that it ended when it did, even if it was an abrupt ending. 3 stars.

I would have to be truthful here, that I loved the cover of this novella, which is what prompted me to choose this but I don’t see why it’s in blue. No, I love blue but... the gown Ella wore was actually green, so...

“Cynders & Ashe” can also be found in The Mammoth Book of Regency Romance.
Tweet