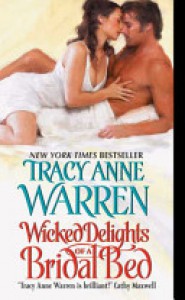 
Would you believe it when I say, I've only started reading it last night and already halfway through? I am actually enjoying it quite a lot. I love this theme of hero/heroine loving the other for a long time, if the author can pull it through well enough. Adam is just that and TAW, so far has done a good job. This one's the most fast paced of her books, at least for me. I loved the whole Byron family, their easy banters, specially between the sisters-in-law Meg, Claire and Grace. I felt a lot for Mallory when they'd talk about their lives, husbands and kids. All the hullabaloo in the family gathering. But I laughed the most when Adam was discovered by Grace and Jack in Mallory's bedroom and Jack was threatening Adam with satisfaction (talking about the pot calling the kettle black!) and this is how it was:

“Why you underhanded bastard!” Jack roared. “And to think I trusted you with her. To think all of us, the whole family, let you go off alone with her these past couple of weeks. Here we were imagining her safe in your company, when all the while you were working your schemes on her. I thought you were her friend. Instead, you wanted nothing more than to seduce her into your bed.”

“Actually, I believe this is her bed,” Adam replied smoothly.

A muscle ticked near Jack’s eye. “Don’t be flippant.”

“And don’t you be a hypocrite.”

Grace sent her husband a rueful glance. “I suppose he does have a bit of a point, darling.”

And man, I was laughing so hard! Had to copy it lolz. :p

Now, Adam is happy to have her as his own. So, how would Mallory react to all these, since she has no idea of Adam's devotion to her. It was mentioned that she had some infatuation for him when she was 16 and he being 26 at that time politely refused to act on that. But Adam has been in love with her since then. He also had some personal tragedy, lost his younger sister. Had money problems which he, by now, has resolved. Overall, I'd say he's very realistic except for his devotion to Mallory.

So far the story has been smooth, without much emotional turmoils between the characters (they're on their honeymoon now), I'd like to see what happens next.
*****************

Ahhh, Adam, sexy babe ... I'm still feeling those butterflies in my stomach... *sigh* YOU ARE SO GOOD!!!

Actually, when I was reading, I thought of so many things but now ... That love scene was so damn good. But I'll come to this point soon enough. Everything was going smooth as I said earlier. I loved them, really. Adam and Mallory seemed so perfect for each other. I loved the way Mallory reacted towards Adam's house (he was a bit uneasy thinking it wont be enough for her and he wants to pamper and indulge her ... boy, would that I had someone like him!). Also, when she learned about Adam's sister Delia (poor girl! :( ) ... She is a very good, honest and worthy heroine. I loved it all. Specially, when Mallory figured out she has already fallen in love with Adam (yup, he'd confessed about his feelings before her), things got much much better. There was this love scene afterwards I loved, with a sleepy Adam and ... Hmmm ...

Moving on to the twist. Yah, what else can I call it? It's nothing uncommon but I simply wasn't expecting this. Major Hargreaves (Mallory's dead fiance) comes back! And, I thought that is so unfair. Poor guy! I felt so sad for him when he learned that she'd already married Adam. :( I wish he'd get a book, at least a novella, where he'd have his own HEA.

Then Adam finds them kissing (which was a complete misunderstanding since the Major still thought he's engaged to Mallory and hence the kiss), he gets angry ... Mallory tries to explain ... He wont listen ... Then that love scene comes where Adam not only confesses more about his feelings and how long he's been loving her but also does almost everything to 'mark' her as his. I loooove such scenes if they're done right and TAW pulled it through excellently. I really was wondering how things would go between them since everything seems too 'perfect' and nothing intense ... And I got my answer.

Ohh, loved it til the end. From the clash between Adam and the Major, Mallory's going away (which I thought was the right thing to do), to all those monologues by Adam about how damned much he loves her and misses her and finally, Mallory's realization that she'd actually always loved him (duh, she was infatuated when she was 16 ...), even more than Micheal. And I actually understood her standing.

I really really felt for the Major, specially when he told Mallory that it's her thought that kept him going in that French prison ... Ah, so so unfair! :( He was a perfectly nice, sincere guy with such devotion for Mallory. In the end, I was kinda feeling pissed that he had to go through this. Poor poor Micheal! :'( I still think he should get his own book and HEA.

Besides this little feeling of sadness, the book was terrific, best of Ms. Warren's so far IMO. I definitely loved Adam, even when he was going through his bouts of jealousy which made me think, hello, what about your past? Your lovers? Guess my modern sensitivities rebelled. It's a bit unfair to judge Mallory the way he did, of course he knew cause he's done the same with some other guy's wife ... ugh! But guess I didn't care much since he was such a lovesick puppy. :p

Also, another positive (IMO) thing was there were no details of such encounters (thx the lord!), only a little info from Mallory where she thought of hearing such things about Adam from some widow who was bragging about 'just that' to one of her friends and one little monologue by Adam himself. No name or such stuff. If I were Mallory, I would've at least asked him: "What about you? How can you judge me this way? Have you any idea how I felt hearing such stuffs about you? Maybe now you have some idea ..." I definitely want to know how Adam would've reacted to such questions.

In the end, the excerpt of Drake's book. I'm definitely interested. Just a bit confused about the heroine's hair color ... deepest brown, glints of red and also threads of gold ... and silver??? Guess would have to wait for another 4 months for my answer! *note: this review was done in the early March.