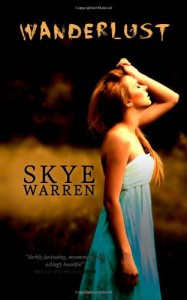 Reality always collides with fantasy when I’m reading a SW novel. I’ve come to appreciate her writing, as well as her intriguing storyline and characters. They might not be perfect, but her characters almost always portray a solid inner-strength that I can’t but end up. Hunter and Evie weren’t any different. To me Wanderlust was a milder work of dub-con from SW because after I finished reading it, I literally sighed with pleasure. Umm, well, that has not been the case for me with her darker works, such as Trust in Me.

Evie hasn’t interacted with many people in all her 20 yrs. of living. Her home is a prison where she has lived with her mother mostly. Her mother is psychologically disturbed, socially inept. Her influence has been quite intense. She has always been telling Evie that she’s only protecting her from a very bad, ugly world. Yes, on the surface, she might’ve been right. Evie did experience sexual abuse on the hands of one of her mother’s ex-boyfriends, something which was discovered too late. Her life hasn’t been that ‘regular’ in any case but Evie has had enough of it! She wants to explore the world, whatever lies ahead she can tackle later.

Evie has been obsessed with Niagara Falls ever since she found this book detailing information on it. She had read the book from front to back many times. So much so that Niagara Falls becomes the ideal of her vision; a place she wants to explore, hoping that this would mean her freedom. She doesn’t have a lot of money, doing small jobs from home. But she has managed to acquire a job somewhere near her destination. One day, through shouting, accusation and blame-game, she bids her mother farewell. After all, a new world waits ahead of her!

But things don’t go as planned. After a few wrong turns, Evie gets to this truckers’ stand somewhere that seems like the middle of nowhere. She also manages to get a room in a motel that seems almost empty. It was a creepy sort of environment, something that gives you the déjà vu. Evie has a feeling but she ignores it. She won’t let her mother’s dictates rule her life anymore. When she goes out to get a bite, Evie experiences the beauty of the setting sun. Her loveliness attracts someone standing close by; a trucker leaning against his own ride. Evie, again, has an odd feeling, sensing the way he’s observing her. She goes in, he does too; a tall, lean and handsome guy. He sits somewhere so that he can have an unobtrusive view of Evie. She orders meal but she can’t eat it. And the waitress doesn’t help her in the matter by scaring the sh!t out of her, mentioning some stuff about not denying whatever he wants... because no one ever does.

Evie runs back to her motel room, afraid. She decides to take a shower to calm herself down. Her mother’s voice keeps ringing inside her head. And when she comes out of the shower, in the shadow of her room, she finds that guy waiting for her. Evie should be scared but she’s oddly exhilarated. She knows what this must mean. Even though he doesn’t speak of it outright, his point is clear. This should be a one night stand kind of thing. Evie is attracted to him and it’s more than obvious that he feels the same. But just how much he is obsessed with her is proved in the next scenes. He’s not gentle with her, and with Evie’s own past history (which he coaxes out of her before he proceeds) this should be a nightmare. Strangely enough, it’s not. She doesn’t know what to call it… neither did I.

Worn out from too much sex, Evie passed out. When she awakes, she finds herself behind a truck; his truck. She has been kidnapped by him! Evie feels woozy, and it’s probably because of the drink he gave her at one point. A little later, when he gives her food and drink, Evie has already known she doesn’t have many choices. She’d be ‘used’ by him throughout the journey. They keep journeying on the truck, living like nomads. Sex is of course a part of it all and Evie complies with his wishes.

But is it really the case? Would she just sit there and take it or would she run from him?

Evie wants to run... and she tries a few times. Trouble is, Hunter, as she knows his name by now, isn’t really cruel or mean to her. He feeds her, sort of takes care of her. Even having sex, though it’s rough, he doesn’t bloody or bruise her. But, it has already been established that he won’t let her go… not now in any case.

One of her chance of escape comes when Hunter finally trusts her enough to let her accompany him to a diner. Between all the confusion, stammering and shaky courage, whatever it was, Evie manages to go out the door, telling the staff about her kidnap, only to fall in the clutches of some other drunkards. When she was about to be raped, Hunter saves her.

Incidents like this makes Evie think. Would she exchange this ‘prison’ for the other prison she left behind, the one with her mother?

Their trip to Niagara Falls was interesting. Hunter takes her there, knowing that is where she was initially headed. They share some of their pasts, as if they’re some old friends or a couple spending time together. Evie discovers a very different side of her kidnapper; a free and exuberant one. She starts enjoying her time with him more and more. This is how he must’ve been before…

The fact of the matter was, by now, Evie has come to care for Hunter with the sad eyes and smiles. Hunter likes to give others the impression of a ‘monster’ while that is just what it is; an impression, because when Evie, in one of those unguarded moments, glimpses the man inside, she can’t but be more fascinated by him. Hunter defies society in his own way but not without paying a big price. He’s lonely, unwanted; a convicted rapist to the eyes of the society.

But that is not the real Hunter. Evie wants to know that person, who he used to be before his time in the jail; an experience that changed him irrevocably.

Evie wants to help, but how can she? She herself is in need of help. Could she live with whatever he has to offer?

One day, they stop at the home of a loving couple, who obviously harbor a great fondness for Hunter. They certainly don’t view him as a ‘monster’ or a kidnapper. This intrigues Evie as she’s forced to act as his girlfriend. At night, she gives into him, and then, the thought of escape comes to her, yet again. Surely this couple will help her if she explains!

They don’t really believe her words, and Evie is distressed by this. She runs out again, on her own and walks for miles through the woodlands. She met two young men, hoping they’d be her savior, but alas! World is indeed not a safe place, her mother’s words don’t stop haunting her. This time, she’s saved by someone else but it was already late. The old man takes Evie in for a couple days until she recovers. I thought she recovered too quickly but maybe, with her psyche and her past, she has always been prepared for such ordeals. I can’t really explain.

And I know it’s not ‘normal’. Then again, I wasn’t looking for a perfectly normal storyline so I moved on.

Evie has already done some research on Hunter’s case while she was recuperating. Hunter was innocent of the condemnation, yet he suffered for no reason at all. It just broke my heart to read how cruelly he had been treated. She begins missing him. Evie now feels only Hunter can save her. Niagara Falls isn’t her ideal anymore, not the kind of freedom she envisioned or even craved for.

Freedom lies with Hunter, wherever he takes her.

The ending was so amazingly heartfelt, can’t explain. I loved when Evie discovers Hunter waiting for her outside, even though she had ran from him. I loved how she smartly dismisses Hunter’s words of submitting his written confession to the police. Hunter, who had tears in his eyes when he finally understood that Evie won’t leave him again.

Who says life is fair? But Evie appreciates that Hunter has found her, again. Maybe in some way, they can be that balm to each-other for the hurt and unfairness that was dealt to them. I don’t know where their life is headed but I could only wish them all the best.

The only thing I probably missed in the entire story was a glimpse inside Hunter’s mind. He was sexy, sweet (yes, I thought he was) and broody. It would’ve been a treat IMO.

I also learned some stuff about Niagara Falls that I found interesting, but the story of the Hermit of the Niagara Falls stuck with me the most. Irony? Probably. I want to know more about Francis Abbott but sadly, we never will. After I read through those stories, I could see how the allusions played out in the story. I thought it was done very well.

If you’re looking for a lot of sex of the average erotica, you won’t find those in Wanderlust, so better you don’t expect something like that. But the story plays with your mind, your feelings and your conscience; in that regard it’s dark. You will question yourself but the answers are always open-ended IMO.

I’m just glad that I emerged with a happy heart. 4.25 stars.