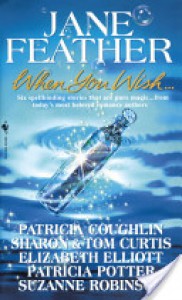 Note: my review and rating is solely based on Elizabeth Elliott’s novella Bewitched (4 stars).

“To thine own wish be true. Do not follow the moth to the stars.”

What an interesting little theme for an anthology! I must say, I wasn’t expecting anything like this. Before I head onto my actual review of Elizabeth Elliott’s Bewitched, here’s what I uncovered about the novellas in When You Wish:

Both Prologue and Epilogue and the first novella are written by Jane Feather. The other authors follow through in the middle. I only decided to read Elizabeth Elliott’s novella because she’s the only author in this anthology, so far whose works I’m familiar with. The stories span at least 50 years (1814-1857), but the Prologue and Epilogue are set somewhere in the medieval times. The very common theme that connects all the stories, is a magical bottle, with the message I’ve quoted above, which knows your desire, your wish and would help you find your true love. I believe the Prologue and Epilogue hint at the beginning of how this bottle came to be and then the stories go to show you about 6 couples in the Regency and the Victorian era as they find their true love. Now that I’ve got this, I’ll have to read the other 5 stories sometimes later to connect the stories better. The ratings may change afterwards!

I really liked EE’s novella a lot, which is the fourth one. The story was sweet and the H/h lovable. In this novella, we meet James, who’s now in his country house, attending a house party thrown by his mother, Evelyn.

Even though financially alright now, James is a man who doesn’t take chances, especially after his father lost a great sum of money to a baron, which led them through some difficult times in the past. James doesn’t like this idea of annual house party and the costs of it but he’s more annoyed by his mother’s matchmaking schemes that accompany it each year. Suddenly, as he was viewing the party from a hidden balcony with his mother, James comes to learn about the newest guest, Faro. At first look, Faro seemed a very plain looking girl, standing next to the beautiful young widow, whom Evelyn was recommending to James because of her big fortune. But, there is something about Faro also that strikes James like he has never seen it coming. He is completely bewitched by her. As his mind turns to carnal thoughts, he notices Faro blushing, as if she can hear him telling those aloud... Then Evelyn bursts his enthusiasm with the news that Faro can read objects and tell their history and that she’s the daughter of his most hated enemy, that baron who ruined their lives once. James is now determined to throw Faro out of the estate thinking of her as a swindler of sort. Evelyn takes umbrage in this though, as she likes Faro immensely and asks him to at least test her before taking any hasty decision. Just to appease Evelyn, James obliges.

Faro, of course, felt on her skin what James was thinking about her. Faro’s ability of reading objects was a gift from her mother, which turned into a curse of sort soon enough. Her lifestory is pretty sad, neglected by both parents, Faro and her younger brother, Hazard, never really knew love. Faro’s father was an infamous gambler, married her mother on a whim, not believing in her abilities. Later he came to despise his offspring too, learning that the whole thing isn’t a ‘flight of fancy’ as he originally thought it was. Faro has learned to face people’s judgment and outright hatred on the way. But, Faro’s father has left debts, which needed to be settled and Faro now uses her ability to entertain people in the balls and the parties and earn if someone pays her with something.

As James is introduced by Evelyn, Faro is captivated by him, especially his amber eyes. But James also turns out to be a meanie to her. He invites her to his library and Faro all of a sudden knew just why. The test doesn’t go well. James hands her a small green and silver bottle, which apparently some gypsy gave him on his way to Blackburn House to attend this party. He wants Faro to tell him its history. Faro takes the bottle in her hand and tries but she kept getting distracted by the bottle’s energy and the flashes of histories full of lovers and their intimate moments. It stops at something totally unbelievable; she, lying naked in the arms of an equally naked man, her lover… and then the bottle reveals, Lord Wyatt. Faro starts feeling out of sort by this vision. James takes her momentary inability as a failure and asks her to leave the estate in the morning.

But the next morning, Faro explains that she has to wait for the coach she hires for another few days. Until then she can’t left. But the thing is that, James’ ire or rash impulses have already cooled where she was concerned. It seems like, he keeps feeling this thing, this ridiculously helpless feeling of happiness whenever she’s near. James decides to know his enemy better in hopes that he’d learn something important that might explain her real intentions. As Faro was going out, James insists on accompanying her. This outing proves to be a great eye opener for James. He learns that Faro is an artless girl, who speaks her mind. She’s also a very talented painter. Then, he also learns about her family trouble and so on. James decides to believe that because of the debts, she has taken this path to entertain others. As they talk, they end up kissing…

In these few days, there are some small incidents and James slowly starts believing in her abilities. Already James is smitten with Faro beyond belief and he knows it’s not just lust. Faro, well, she already knew James is her destiny from that vision. Faro can’t touch people without knowing too much intimate information from their essence and most of the times, she hates it. But James is a different matter altogether. I don’t quite clearly understand why is it that she never saw James’ past or other intimate things but it seems like she can touch him without any negative feelings. Maybe the bottle had a hand in it, I don’t know or maybe James doesn’t have very many negative sides. It was mentioned that James is sort of a recluse and doesn’t care for London and all the balls that are held there. I wish there were more exploration on James’ past.

The last attempt to prove her innocence (not that James was condemning her for it anymore) becomes a winner for Faro but because of a misunderstanding, she leaves James’ library hurt and crying. James has already proposed marriage, knowing he wants her in his life no matter what. But feeling vulnerable because she doesn’t want her marriage to become like their parents’, Faro rejects him at first. I found the ending beautiful as James goes to prove with words and actions that this thing between them can’t ever be ignored. But the epilogue confused me. It spans quite a few years after their marriage, their children being grown and all that. Maybe it was done to connect with the next novella, I don’t know but we get to see how the bottle finally slips out of the Wyatt family.

Overall, a very enchanting story. I totally believed in all the magical aspects and Faro and James’ instant connection. This is why I love EE’s writing. Otherwise, I wouldn’t, at all, enjoy it as much as I did. 4 stars.

PS: There was a mention of the Duchess of Remmington, who is sort of a recurring character, even if by mention. If you haven’t read EE’s Mongatues books, then you should. But as per the time frame, this Duchess was the heroine of Scoundrel.
Tweet