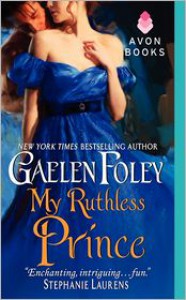 In my review of My Wicked Marquess, I said that I wanted to know more about Drake. The story of his torture in the hands of the Promethean Council instantly found a place with me. I know how great GF is when she’s writing a tortured hero, I highly recommend Lord of Ice to anyone who wants read a book with a tortured hero. Because of that, I might’ve expected something great from Drake’s book. Sadly, the book gave me a mixed read; some I liked, some just meh. As a series, Inferno Club has been a downer for me. As I read book after book, I wanted the old Gaelen Foley back because I adored her writing style and everything that went with it. Not this series. Anyway, I’ll try to give a brief of the story and my opinions to why I wasn’t really impressed.

We know that Drake, Rohan, Max and Jordan are the chosen knights the St Micheal’s Order, an ancient order of agents who fought with the evil Promethean Council for centuries. Highlander Virgil recruited them from their high-borne families and trained them in the agent’s training school from a very young age. As they grew up, they lived under the impression of rakehells and libertines (not all of the ‘impression’ are impressions, mind you... Rohan was particularly, um... let’s just say overused) in a club called the Dante House. It looks like a bawdy house (with real prostitutes who service them too) but underneath they work and plan stuffs against the Council in here. Things have been moving since Max’s book, My Wicked Marquess. The heroine, Daphne drove me nuts with her TSTL activities. I didn’t like Rohan since the beginning for his penchant for shagging anything in skirts so his book... waste of time, including the heroine, Kate. Now, My Irresistible Earl was an improvement and still my favorite of this series. Jordan and Mara’s chemistry and the story itself were amazing. Loved it to bits! Jordan was HOT! In between, we got to know Drake being tortured by the Council who caught him and killed his other two fellow agents. We knew that a Promethean names James Falkirk has saved him (or so to speak) from the torture, only to use him for his own purpose. Falkirk was plotting against the current head, Malcolm, who unfortunately, is the brother of Virgil. Malcolm’s son Niall is supposed to succeed him. We get the twist that Niall is actually Virgil’s son and so on. But Niall is as evil as any Promethean who wants nothing but his own power. In book #3, Niall was captured by the Order. Drake was already working for the Council, about which his fellow agents were worried. When Drake saved Falkirk from Niall (who knew of his betrayal) and went with him, Order thought Drake cannot be saved. So they gave orders to kill him, along with any other Council members. But, Max, who’s Drake’s childhood friend and closer than the others, never lost hope.

In between, we saw Drake in his estate gaining his health and self-possession. His mother, along with the others, thought him dead but was overjoyed to have him alive. We meet Emily, who was his childhood friend and cares about him a lot. Drake had some memory lost and Emily, a tomboyish kind, tried to help him out. She’s a woodsman’s daughter and even though she knew they had no future together, she loved Drake; it was as plain and simple as that. Drake cared for her too, maybe even loved her but sadly, he never told her anything. He used be a rakehell, in the genuine sense... you know, Order business and all that (puhlez, I don’t fall for that crap anymore!). Now, Drake could only remember Emily and that they shared a bond he never shared with anyone else. But, when he was recuperating, Drake chose Falkirk and left for the continent with him as his bodyguard. Emily was hurt but determined to find him. So were Drake’s fellow agents. Niall was kept under lock and key for information.

In this book, Drake is in Bavaria, in Waldfort Castle. One of the Council’s men is the owner. Drake has his own plans for the Council, 1st of which is to gain trust of them all. Falkirk already thought he’s converted as Drake took their initiate’s seal. Emily followed him there. It was kinda unbelievable that amongst all the dangers lurking around, she arrived hale and hearty in Bavaria, tracking Drake all alone! I didn’t buy it, no matter how good a tracker she is. Anyway, that aside, Drake soon found her out with his men. He introduced Emily to everyone as his mistress of sort from his country for safety purpose. He took her in and kept her in his spartan room. Emily is not sure what to think of Drake because most of the times, his expression is inscrutable. It was not her Drake but Emily is determined to bring him back to life and make him leave with her. Drake, on the other hands, is having trouble with all the conflicting thoughts along with how to keep Emily safe. And he would keep her safe no matter what. Soon though, they talk about their troubles and Drake confesses that he’s playing a part here, that his memory has returned; at least most of it. And he has a big plan for the council members.

Then, as the story progresses, the other council members makes Falkirk do something to have Drake prove his loyalty. Falkirk, no matter what he’s become, held a weird sort of fascination for Emily and affection for Drake. He didn’t like it but to uphold his cause, he needed to prove his trust on Drake. So they make Drake give his ‘dearest blood’; a sacrifice of someone close to him, the blood of an innocent. They somehow realized that Drake and Emily have never been lovers and that Emily is a virgin. They make Drake bow to their will, to sacrifice Emily to prove his loyalty. Drake accedes. Emily eavesdrops and gets scared. She tries to run away... ironic because Drake asked her many times to do the same, that he’ll help her but she denied to leave. When she was fleeing, Falkirk accosts her and politely tells her she’s to live like a princess from now on (as any other sacrifice would live the last of their days). They, along with Drake, didn’t know that Emily knew. So they keep her in the best of apartments, with best food and dress. Drake isn’t really allowed to see her but he does once or twice with Falkirk’s permission. They plan to poison the members who would arrive for the special night a fortnight ahead. Drake had another plan though. When he goes with Falkirk to have a look at the temple ruins of the Prometheans, he discovers something that would come handy on the night. But, Emily’s idea was better, so he gives in. Anyway, a few days later, the plan was foiled when the maids cleaned up Emily’s room along with the poisonous flowers. She acted as a vacant miss who had no idea of what she’d done and somehow the maids were convinced of her stupidity. Now, Drake has only the other option to consider.

Niall, in London, kills Virgil and runs away. The old warrior, having had his son close, lets his guard drop and pays. I was sad about this, along with the fact that I wanted Niall to reform and have his own book but... sigh. Other agents weren’t there because they were making arrangements for their journey to Bavaria to track Drake, as Emily’s letters informed them. It was a shocking discovery and with heavy heart, Max, Rohan and Jordan are off to Bavaria. Niall saw the letter while escaping and now was on his way there too.

Then, Drake and Emily, after all the catastrophe and trouble looming over them, decide to give into their passion. Honestly, they were a sweet couple, even a friendly couple but passion? I saw nada, felt nada. So, the love scenes of this book didn’t stir me at all. They sneak away somehow to have a night of passion outside the castle walls. It was easy for Drake to distract the guards on Emily’s door since he’s the captain of Falkirk’s security. Soon Drake decides this isn’t worth it so he considers running away with Emily, who is giving him new hopes in life. But that doesn’t come to pass as Malcolm, getting the message from Niall, attacks the castle and there ensues a big battle, in which most of Malcolm’s men die. Falkirk’s too, with many of his upper class council members. Drake steps in, making Emily unhappy. Somehow, before being fatally wounded by Malcolm’s sword, Falkirk saves Emily from being killed. Drake kills Malcolm. Then, on his deathbed, Falkirk makes Drake the head of the Council, as it was apparently prophesied in the old scroll by their ancestor Valerian. I wouldn’t have believed as wounded as he was, Falkirk had much life in him for such a lengthy lecture and announcements. *odd stare from me* Drake accedes to his wishes which again concerns Emily. Now Drake keeps thinking all these powers, maybe he should keep it and keep Emily too as his concubine. WTF was that?! Then Emily, even though she was not happy with Drake’s decisions, can’t say a thing back to him when he’s touching her. It’s chapter 18 (of 23 chapters) and she’s thinking she’d live out her life as his mistress as she can’t deny Drake anything. It was soooo not sexy! She even lets Drake shag her afterwards. This part, I was kinda pissed and was scared that this book will go down for me. But Drake informs her that it’s all a part of his plan and he needs to be convincing. And they keep playing out their parts, too convincingly for my choice. They also found a new sacrifice, a little boy, instead of Emily. Falkirk, before he died deemed her as ‘not innocent’ because she killed men in the clash, even though he knew that Drake and Emily had already become lovers.

Max, Jordan and Rohan have already closed in on Waldfort Castle by then, so has Niall. Soon, new fights ensue. Niall is caught by Drake, who has no idea about Virgil’s death. Niall, ironically, had no idea too about Malcolm’s. I will leave the big climax here but have to tell you, I loved the ending. It was quite emotional because of Drake’s fatalistic plan. 3.75 stars because it was worth a try. Maybe my expectation was high, I don’t know. I’m still gonna mourn the loss of the old Gaelen Foley.

For the next installment:

1) Since a big part of the current clash between the Ordar and the Council is apparently at an end, I believe we’ll see some new developments in Seb’s book. Already the epilogue is giving new hints about something to do with the parliament. After Virgil’s death, things are now awry for the Order. Sebastian has been given a big responsibility.

2) We also got the names of two of his friends, who are missing as well- Nick and Trevor and Seb’s worried for them. I’ve recently read a GF interview where she expressed that Nick and Trevor will get their own books.

3) I think I’ll be picking up MSV because I’m also interested in the heroine, Clarissa, who was introduced 1st in book #1 as Daphne’s close friend.

4) I’m not sure that we’ve seen the end of the Promethean Council though.


This ARC was provided to me by Avon/HarperCollins via netgalley which didn’t influence my review and rating in any way.