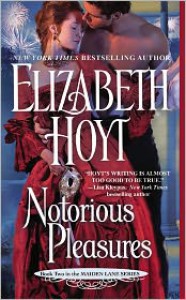 
I've just started this book, read about 3 chapters but have to say it lost me in the first chapter. Why? I couldn't, just couldn't believe the scene of our h/h's first meeting! OMFG!!!! Some might find this funny but I didn't and I already dislike the hero Griffin and not very impressed with Lady Hero so far. I wouldn't even make a post now if I wasn't rendered speechless in the first chapter! Lord help me through the rest of the book. :|
****************

Yah, I still can't believe that scene so although, I'm liking parts of this book, I can't but have hesitations about the hero Griffin. Also, that Lady Hero had no problem at all with this certain scene is just ... well, too much for my delicate sensibilities! C'mon, it was the yr 1737 and she was supposed to be a virgin! And they were talking after she ... ermm ... interrupted him ... OMG ... *gag*

*yells*
MS. HOYT, I DON'T WANT THE HERO MEETING THE HEROINE WHILE HE'S SCREWING ANOTHER WOMAN, RAKE OR NO RAKE!!!! ... It's as simple as that. *sits back again, looking prim and proper*

Now, to the main story (trust me, I thought I'll try to do the matured thing and overlook it but JUST COULDN'T) ... That was so ewwww!! ... Ahemm, sorry. Back to the story. So, Hero 'meets' Griffin in her engagement ball to Griffin's brother Thomas aka the a- hole marquess. I thought I'd like him (Thomas) but the more I read about him, the less I do. That man is obsessed with his ex-mistress, a cheap, gaudy woman who deserves no respect at all! Hero's just a convenient match, being a Duke's daughter and he being her brother, the current Duke Maximus's ally in political matters. Now, after 'meeting' Griffin, Hero at first had no idea who he was but soon finds out. The book says she disliked him, disapproved of him ... well, I saw no such thing! She was actually admiring his back view while he was in action with a married society whore. Lord, I can't get enough of that scene! I was literally chanting to myself, "lord, not the hero, not the hero, not the hero, plz plz plz plz!" But from the talks of muscled buttocks I knew I wont have my wish granted ... *sigh* It was that bad. And, she jumped into bed with him quite easily. Here I thought she's a smart woman, even if a tad reserved. Take that back.

Well, this turned to that, Hero and Griffin somehow found themselves alone often enough and their attraction grew with kissing and touching (really, Hero??!) ... The orphanage work was going a bit down, with the architect being a swindler and all that. With both Temperance in honeymoon and Lazarus's mother out of the country, Hero finds herself in a dire situation. And, yah, then came Griffin, saving the damsel in distress. He took her to another architect, a friend of his and made arrangements with him, even offered her monetary help, which Hero quite unwillingly declined. Et voila! She was impressed. Oh, did I mention Griffin looks after the family fortune (by running an illegal gin still) while Thomas the a$$ just spends it in mistresses and carriages? What a pair! And the brothers can't stand each-other at all. It's Thomas who's always trying to belittle Griffin, which I found immensely annoying. BTW: I don't really like it when h/h is sleeping with each-other while they're engaged to other people but here, I dislike Thomas enough so didn't mind Hero sleeping with Griffin.

To tell you the truth, there are things about Griffin is really praiseworthy ie: the way he took care of his family when they were in grave financial difficulties, whatever the means. For that he had to leave his studies and he was a good student. Also, the way he took care of Hero's youngest sister Pamela when she fell ... I liked those things. Even his yearning for Hero was ... quite ... good. He's actually fun to talk to, I did laugh with his dry wit. But, for that one scene. I'm trying hard to concentrate on his better sides but just ... I mean, he was sleeping with a woman now and the next instance, he was flirting with Hero and then suddenly she's 'inside his skin', just like that! Really? Even the way he talked to Hero in that scene and also after their first love scene, I couldn't but think he has no respect for his bed partners. Well, all his choices before Hero were abominable, gotta give him that!

Beyond what I mentioned here, nothing much is happening. It's all about their confusion about each-other, what to do/not to do. But, I thought Hero's refusing Griffin's marriage proposal was the right thing to do because I agreed the way she reflected on it later. What I didn't like was her stodgy idea of "duty" and "as a duke's daughter, the right thing to do is to marry into a loveless yet very convenient match" cr@p!

The best thing about this book is the mystery surrounding Silence, Mary Darling and Charming Mickey. The more I read, the more I wanted to know what's going on. I've some idea to who Mary Darling might be! I LOVED those scenes in and out of the orphanage, scenes with the kids and Silence's love for little Mary Darling. I really like Silence. Couldn't help but feel sad for her when she heard the news of her widowhood. Well, good riddance to that piece of whatever! *I know I know I'm horrible* ... AND NOW, I AM DYING TO READ THE NEXT BOOK AND NOVEMBER IS SO FAR AWAY *sniff sniff* :(

Then, after a few chapters, my views on Griffin started to change...

Ok, I know I'm late with it but I had a great time. Last 5 chapters were the best of this book. So many things were happening at the same time, Griffin and Hero's relationship was taking such turns, I was really having a blast!

About the earlier comment, I SO ADORED that scene, can't believe that she didn't say those words back after everything. Man, I love a guy who falls so damn hard for his woman that he can cry while confessing his feelings. Though it wasn't shown but the implication was there that Griffin cried and my heart just melted for him. :( I ended up loving him. The bleakness of his situation was so heart wrenching (he being a rake, met her in a very awkward situation and then she telling him he's not the safe choice, even though it was plain to see she loved him too ... Lord! :( ). I wasn't happy with Hero at that moment at all though initially, I wanted her to give him some pain ... eh, so wrong of me! :(

I couldn't really find anything for Thomas in the end, wanted to kick his arse for slapping Hero. And the scene afterwards, the way Griffin reacted was just wow. I couldn't believe she didn't hug him but just ran away. I understand how she can feel confused after such debacles but c'mon! He needed that. :@ And the scene where Griffin goes to meet Maximus to tell him of his intentions for Hero ... it was good, Griffin's words were. Griffin did sometimes remind me of LK heroes and of Simon from TSP to some extent. Simon was also crazy about Lucy. I had such a GREAT time reading that one.

I'm gonna give it a 4.5 rating, just for the last few chapters. Don't get me wrong, I think I have to clarify. Though initially I disliked Griffin (yah, guess you can see that already) and wasn't sure how it'd go, I had a really good time in the end. EH did prove again why I think she's excellent! I'll be eagerly looking forward for the other books of this series. :D

So, here I am, dying to read (again, can't help saying it) Mickey and Silence's story. The first chapter got me so hooked there, I felt I'll cry that I have to wait for the book. And, I've started some re-readings, it took me quite a while to concentrate since I was so damned deep into this series ... And, of course, Mary Darling's identity is somewhat obvious, isn't it? ;)

PS: The fairy tale of this book was titled "Queen Ravenhair".
Tweet