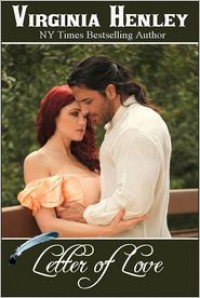 Though I’ve heard of Virginia Henley, I haven’t read anything by her yet. So I wasn’t sure what to expect before I started this novella. But, honestly, I thought it was quite nice and was a good introduction to her writing, which I liked too. But being a novella, I felt that the story was hopping in time and the main characters and their relationship weren’t given enough time to develop well. At least I didn’t really know what to think of them, to analyze them. I wish it was a full-novel so that the love between Burgundy and Nicholas had a chance to grow convincingly for me.

Now, before anything, I have to say that I hated the heroine’s name; I mean what kinda name is Burgundy Bedford? I was afraid she’d be as horrendous as her name but surprisingly she was strong and fiery, the kind of heroine I really admire. Queen Elizabeth has made a match for her with the Earl of Devon, Nicholas Mountjoy. Burgundy’s mother was supposed to marry Nicholas’s father, as per the Queen’s order but she ran away with a spy of the court, married him and suffer through it. She died when Burgundy was born. Burgundy doesn’t like the Queen for it and all the scandals that ensued for her mother. Even though she never knew her mother, Burgundy fervently protects her mother’s name, as well as she could in front of the Queen of England. Now she won’t marry Nicholas not only because it isn’t a love match but also, it was hinted that he used to be the Queen’s lover, a courtier; the rakish kind. She doesn’t like him at all and when the Queen calls him in, she detests their intimate ways of speech. I wish some light was shed upon it since neither Burgundy nor Nicholas ever spoke of his relationship with the Queen. Knowing this, I also didn’t like Nicholas on spot.

Nicholas found Burgundy not only a beauty but a spirited one; one he’d like to tame. But, Burgundy tries everything to show him how much she despises him. However, not much was shown from Nicholas’s POV here, very little actually to know his thoughts. Anyway, Burgundy was also in a hush-hush relationship with one of her father’s spies, Anthony. She plans with him to marry in secret ASAP. But her marriage to Nicholas was also decided in a fortnight or so. After marrying Anthony, Burgundy will go to Surrey and take her old nursemaid, Nan with her.

One evening when she was out, Nan brings out something; a century-old book, passed on from mother to daughter of Burgundy’s maternal ancestors. Before Jane Bedford died, she gave it to Nan to pass it onto Burgundy when she’s old enough. There’s only one poem mentioned in here, which ends in “With Honor Comes Glory” but nothing else is mentioned about this book. I mean this was supposed to be stories of love or lost love of Burgundy’s ancestors but I was disappointed because reading the book played a vital role to change her mind about marrying Anthony. So why did she suddenly decided not to marry for love (with Anthony, if she was ever in love with him) but do it for honor, as the book says, to Nicholas? Which is why, I wasn’t sure of her motives. Anthony even tells her to grow up but nothing ever is heard of Anthony even again in the story.

Burgundy marries Nicholas, even though she knew this alliance was because of her maternal grandfather’s shipping business, who denounced her mother for marrying a commoner. Not much light is shed about this as well. The Queen is very happy. She read in her mother’s letter to her that she requested the Queen to take care of Burgundy’s education so Burgundy thanks the Queen for this. Then they are off to Devon Castle in Dunster. I loved the sea voyage a lot, I loved the way Burgundy showed her dislike for Nicholas with her words. They weren’t hateful in that sense but very sharp. I still didn’t like Nicholas so I thought he deserved it, being a cold and ruthless a-hole. When they arrive, Burgundy is taken to her room and soon Nicholas is there to consummate the marriage before he leaves for the fight an uprise in Ireland. There were no details of the consummation (just a line), just the scene afterwards, where Nicholas and Burgundy have a fight and he tells her Anthony was bribed to back off. Again, it was neither said to be true nor false as they never speak of this again. I mean, wouldn’t Burgundy wanna make sure if Anthony really took bribe from Nicholas? She thought she said ‘no’ to him so what was the truth?

Nicholas is off to fight in Ireland, leaving Burgundy quite alone in the castle. Time skips here, months I guess. But she seems happy to spend her time teaching the servants, reading that ancient book and thinking she’d done the right thing by choosing honor over love. (note: her mother’s marriage proved unhappy soon after it was done) Huh? I have no idea what to think of it! Then her father pays a visit and informs her that there is a trap ahead by the Spaniards to defeat the English. She sends a massage to Nicholas saying she regrets her parting words to him.

More months pass by and Nicholas is finally home. He’s been wounded in the war, which was won by the English. Burgundy takes care of him through day and night. It helps developing their relationship but it wasn’t detailed, with only a few pages so I really didn’t feel when they keep saying ILU to each-other and made love finally. Since this was my first VH book, I wasn’t sure if her books are clean romances (as there were no details of the consummation) but I was wrong. It wasn’t as detailed but there was a love scene in the end. Overall a good read, worth a try. I thought, again, if it was a full novel and if Burgundy and Nicholas’s relationship was shown in depth, I might’ve rated it a 4 stars because I just LOVED their banters, even their fights. So finally, 3.5 stars. I believe I’ll try some of VH’s other books in the near future.

“Letter of Love” is a free installment, with 6 chapters and a sweet love scene. It can be downloaded from smashwords.
Tweet