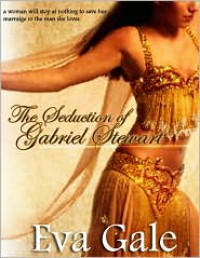 Another sweet, hot read from Eva Gale. I really liked it. The story deals with a couple who are in love but somehow their sex life is now a mess.

Portia loves and wants her husband like no other but Gabriel isn’t giving her what she wants. What to do in a situation like this?

Imagine your husband as a priest and I mean that literally. Gabriel wanted to become a priest but his physical demands are quite high, so he bowed out of that. But, he still wants to rein in his lust. He loves his wife too but to him, slaking his lust on Portia is akin to corrupting her.

So as they browse through a fair, Portia and Gabriel watch an Egyptian stall where a belly dance is taking place. People are fascinated and appalled at the same time. Portia can see her husband flushed and aroused seeing the ‘sallow skinned, coarse haired’ woman dancing a dance that is vulgar, wearing a dress not enough to hide her body. I didn’t like the way Portia saw the Egyptian woman but dismissed it as a jealous woman’s thought. Portia knows her husband wants her, only if he’d act on that too! So, Portia decides to take the matter in hand and learn belly dancing from the same woman who was dancing on stage. Wasn’t it a bit hypocritical? But I didn’t mind about it that much.

Gabriel, on the other hand, is having a hard time controlling his lustful thoughts. First the Egyptian woman, then whenever he looks at his wife, he wants to have her. He feels guilty about it. He knows how much Portia wants him, he even berated her for being so forward once and then felt guilty of that too. He is a man battling with his inner demons, or so he thought.

A few months later, Gabriel can see something has changed in Portia’s demeanor. She walks differently, always glowing with an inner happiness. Gabriel is quite insane so he decides to mask his lust in the form of ‘wanting another child’. Portia straight out says ‘no’. I liked it, I liked that she made him stew a little! *grins* It fuels Gabriel’s determination to have her, however he could. So one day, he corners her again. This time after they kiss, they talk and Portia thinks she has a solution for this little situation...

Ugh, where is the ‘more’ button? I wanted more because it felt the story ended very abruptly! I didn’t even know it was ending until I went to the next page. Damn! Anyway, I really enjoyed it so 4 stars. I totally believed that their marriage need a few good shagging to make it work. It was good to see a needy Gabriel, er, tearing... Ok sorry, a free read with few chapters. Don’t wanna spoil it for you anymore! :p

https://www.smashwords.com/books/view/571">“The Seduction of Gabriel Stewart” is a free read; it has 4 chapters and a hot love scene. It’s available at smashwords.
Tweet