Dorinda and the Doctor 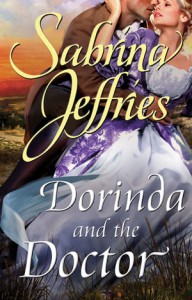 Dorinda and the Doctor  by Sabrina Jeffries is a very short novella in her The Duke’s Men series. It tells us the story of Dr. Percy Worth and a young widow he met over at the Duke of Lyons’ estate. TBH, I never thought Dr. Worth was going to have a separate story of his own, as short as it was. Nevertheless, I had to give it a try.

If you haven’t read The Duke’s Men yet, you might wanna start with Hellions of Hallstead Hall as this series is somewhat linked to the Hellions. Most of the lead male characters here were introduced as secondary characters in the Hellions series. ‘Duke’s Men’ is a fancy name for Manton’s Investigation, run by Dominic Manton. Dominic or Dom’s younger half-siblings (his deceased father, the viscount’s mistress’s children) also help him running this company. Though Dom’s elder brother can’t stand the sight of either Tristan or Lisette, Dom is fond of both and appreciates having them close. Thus he has been banished and disinherited. But Dom doesn’t care a whit, he has studied and happy doing what he loves best.

The Duke of Lyons, Max, was mentioned in the Hellions series. He’s also the H of book 1 of this one. And thankfully, he’s now happily married to Lisette. Dorinda, the h of this novella lives at Max and Lisette’s estate. She’s a distant cousin to Max, the daughter of a noble family fallen on hard times.

Dorinda’s a$$ of a husband died a while ago, leaving her relieved. The man only cared for an heir which his ‘incompetent’ wife was unable to provide. He has plagued Dorinda all his life about it, forcing her to take various medicines and visiting many quacks. She has become so bitter that now Dorinda has no interest of marrying ever again, truly believing that children are all men want from a marriage. She has been led to believe that she’s barren, so... no thanks!

But then there was Dr. Worth who has recently come to live at the estate, working around here. Dorinda has seen him of course and has been oh-so-tempted by the handsome doctor but there is no way she was going to show her interest. If she can help it it’ll stay hidden and buried. What she never imagined was that she too had caught Percy’s eyes from the very first day they met. Percy has never come forward with his intentions thinking she’s in mourning and might not be interested in his advances.

Percy was a minor character in all the Duke’s Men books. He’s the one who treated Max’s cousin, Victor, who was returned to Max’s family after a long time, very ill and possibly dying (Victor’s story is in book 2). Max, who had no other living family member left, was overjoyed and I’m sure he was grateful to Percy for saving Victor’s life. So I wasn’t surprised to find him practicing in and around Max’s estate.

Must explain now that it wasn’t about Ms. Jeffries writing, which I always enjoy. What I found hard to believe was how fast Dorinda and Percy confess their feelings for each-other. Without any background on their previous meetings it all went over my head. Also, there was nothing much on Percy’s life prior to this, which would’ve made the story more interesting. If there were a few more chapters on the build up of their relationship, pretty sure I’d enjoy the novella much more. Personally, I thought the story didn’t add anything important to the series because as with most novella-length stories, it was way too rushed to believe in Percy and Dorinda’s big step into the HEA. It can be read as a stand-alone if you don’t care to link the other characters to the previous books (like me, LOL).

Right now I’m excited about Tristan’s story, the next in the series, and eagerly waiting for it. Meanwhile, 3 stars for Dorinda and the Doctor.