A Woman of Honour 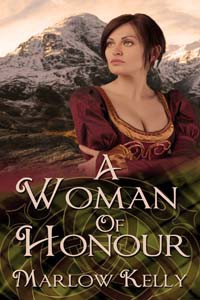 Marlow Kelly’s debut novella, A Woman of Honour, was a short and sweet little historical romance. It had its great moments as well as not so great ones.

When the story starts, Isabel was trying to do something for her clan when she’s caught by a warring clan and locked away in a prison. There, in the darkness, she meets another prisoner. He introduces himself as Duncan of Clan Campbell. In the solid darkness, I believe both needed some kind of human contact, which spurs on a conversation. From that, they form this instant connection.

Isobel is an orphan and was on her way on a secret mission on behalf of Robert The Bruce. When she finds that Duncan doesn’t seem to hold a good impression of the King, she refrains from saying too much about herself. Duncan on the other hand is feeling protective of her. He raises concern about her safety, as she’s travelling alone. Then, Isabel had to confess that she’s too tall and thin and can be passed as a boy in a man’s clothing quite easily. To Duncan, that doesn’t mean anything. It was quite apparent that Isabel had some issues about her looks. But Duncan wants to get to know her better, even though it seems like she’s bound to a convent and quite determined of becoming a nun. Nope, Duncan won’t have it if he can help it!

When they’re handed down the opportunity of an escape, Duncan and Isabel see each-other for the first time. Isabel is struck by Duncan’s handsomeness but her own future plans and that said mission loom before her. She needs to be on her way and soon. No good can come from entangling herself with a man as tempting as him, especially when her plans for future don’t include marriage. And it’s not like he’d be interested in her anyway!

Duncan, though, soon proves her wrong. He’s a tough guy, a warrior, and to him, Isabel is beautiful just the way she is. When they finally evade their captor and take shelter, Duncan is the one who opens up and tells Isabel about himself, his clan and how and why he was caught by the MacDougalls.

Isabel wants to unburden herself but she doesn’t know if she should. Poor girl has already suffered a lot from a clan that never really wanted her or cared for her. The clan she’s willing to prove herself to by taking this risk all on her own.

Duncan is later able to convince Isabel that she should accompany him to his home; the rest they can decide there. He was an overall nice guy and I believed that his intentions were good from the get-go. He wanted Isabel, and that was that. He was also quite determined to marry her, and though Isabel hesitates about this whole idea, I was glad that she doesn’t run from him. It was what she initially planned so that Duncan can marry someone better than her, and not because she didn’t desire him.

As they reach the Campbell land, Isabel and Duncan are faced with new issues and questions, especially that The Bruce had already chosen a bride for Duncan. Can Isabel make up her mind about staying with this man she has come to care for, or will she be forced to make some drastic decision? Can Duncan defy his King for that matter?

I have to say that I would’ve loved a little more build up and backstory on both Isabel and Duncan. Their relationship was great but I didn’t get that instant attraction all that much. It felt more like a friendly relationship egged on by their situation. Given a bit more time, I think I would’ve found it more solid. Besides, many issues, for me, were solved way too conveniently in the end.

Then again, finding the semblance of completion in a novella is pretty tough. Personally, I almost always end up having to deal with ‘that something missing’ in one. But in A Woman of Honour, I appreciated author’s writing style, also the fact that she delivered a HEA I quite liked when I finished it. 4 stars.

I received a review copy from Goddess Fish Promotion as a part of a blog tour, August 28, 2014.